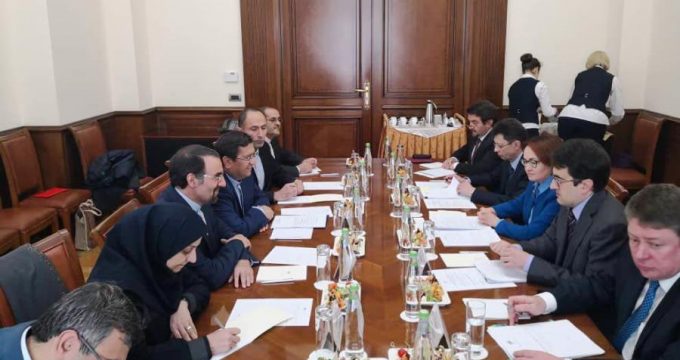 MNA – Heads of Iran and Russia central banks met in Moscow Thursday, and discussed various issues related to banking cooperation, particularity the use of national currencies in trade transactions.

Following the recent meeting of Iranian and Russian presidents in Tehran focused on boosting trade and financial ties between the two sides, the Governor of Central Bank of Iran (CBI) Abdolnaser Hemmati headed a delegation to Moscow and held talks with his Russian counterpart Elvira Nabiullina on Thursday.

During the meeting, the two sides conferd on the use of national currencies in bilateral trade, the use of financial messaging systems, the increase of the level of brokerage relationships, and the funding of civil and development projects.

Head of the Central Bank of Russia, Elvira Nabiullina, voiced hope that cooperation between the two countries’ banking networks would increase in the near future within the framework of a roadmap recently agreed on by the two countries.

They also agreed to continue technical and specialized negotiations between the two sides’ teams of experts until the desired results are achieved in the aforementioned areas.

In a post on his Instagram page following the meeting, Hemmati said the talks with the head of Central Bank of Russia were “constructive”, which could serve as a “good start for developing financial and trade relations between the two countries.”

He also noted the strong resolve on the part of Russian leadership for developing economic ties with Iran, adding that conducting transactions on the basis of national currencies would be one key topic of discussion between the two sides.