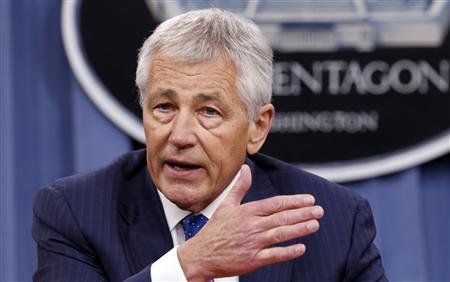 “I don’t know what our foreign policy objective is in the Middle East or almost anywhere else,” says former defense secretary at Defense One interview.

“The U.S. doesn’t even control half of Syria. You’ve got 2,000 [U.S.] troops up in the northeast corner. I mean, come on, you’re not going to drive Iranians out of Syria with 2,000 American troops,” Hagel said in an interview with Defense One. “It’s complete folly to think you’re going to threaten the Syrians or the Russians or the Iranians into anything.

“The Iranians live there,” he continued. “The U.S. doesn’t live in the Middle East. Unless you’re going to somehow eliminate the geopolitical realities of that—well, good luck Mr. Bolton. There is no other way around this, you’re going to have to find some resolution based on the common interests of those countries.”

Hagel’s criticism comes at a moment of intense scrutiny of the Trump administration’s strategy to box in Tehran, an objective that officials have made a cornerstone of the president’s foreign policy in the region.

“This is not the Obama administration, would be my message to Iran and anybody else,” Bolton told reporters at the White House later on Thursday while rolling out the Trump administration’s new counterterrorism strategy, which makes Iran a focus.”

Hagel scoffed at the notion that the presence of 2,000 U.S. troops in Syria would be sufficient to ensure the departure of the thousands of Iran-backed fighters and proxy militia leaders operating in support of Syrian President Bashar al-Assad’s regime.

If constraining Iranian influence is the goal, Hagel said, “how do you think you’re going to have more leverage against Iran by pulling Patriot batteries out of countries, and not paying attention to some of these areas, but [instead] just making these bullying speeches about, ‘We’re gonna sanction you’?”

“This is my point about the confusion. Where are we? What is our policy?”

So far, Trump’s overt pressure on Iran has taken place primarily in the diplomatic and financial sphere.

Gen. Joseph Votel, the head of U.S. Central Command, told reporters on Thursday that the military’s presence in Syria has “an impact” on Iranian activities but that CENTCOM had not been given a new mission.

“I don’t think we’re seeking to go to war with Iran,” he said. “I think the president has made it clear that Iran needs to cease its destabilizing behavior and policies that spread violence and human misery throughout the Middle East.”