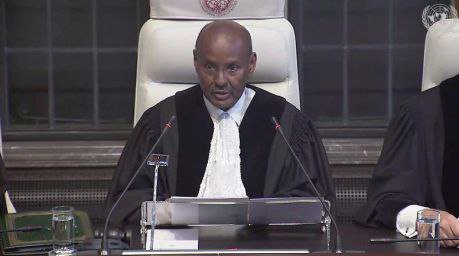 US says ICJ has no jurisdiction over anti-Iran sanctions

MNA – After the International Court of Justices ruled against the anti-Iran US sanctions, the US ambassador to the Netherlands rejected the court’s jurisdiction over the issue.

Iran filed a lawsuit against the United States earlier in July in the International Court of Justice (ICJ) alleging that the Washington’s withdrawal from the nuclear deal and re-imposing the unilateral sanctions in May violated a 1955 treaty between the two countries.

Iran has welcomed ICJ ruling as ‘a victory for rule of law’. Iran’s foreign minister, Mohammad Javad Zarif, tweeted after the court’s decision was announced that it was “another failure for sanctions-addicted USG [US government] and victory for rule of law. Imperative for int’l community to collectively counter malign US unilateralism.”

Iranian Foreign Minister, furthermore, released a statement on Wednesday afternoon saying that the court’s unanimous decision was another clear testament to the truthfulness of Iran and the illegitimacy and unfairness of the United States’ sanctions against Iranian people and citizens.

Meanwhile, according to the Guardian newspaper, in relation to the ICJ ruling, the US ambassador to the Netherlands, Pete Hoekstra, said in a statement “this is a meritless case over which the court has no jurisdiction.”