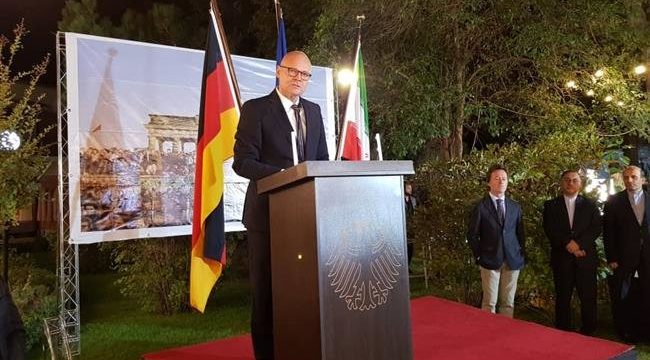 Germany has been, remains fully committed to JCPOA, ambassador says

Press TV – German Ambassador to Tehran Michael Klor-Berchtold says his country has been and will remain absolutely committed to the Joint Comprehensive Plan of Action (JCPOA), censuring the US decision to unilaterally withdraw from the 2015 nuclear deal with the Islamic Republic of Iran.

During an speech in a ceremony to mark the German reunification in 1990 on Tuesday night, he described the US government’s pullout from the deal as a major setback both in terms of politics and economy.

“It is a setback for the rules-based international order. We should not forget that we still have United Nations Security Council Resolution 2231, which endorsed the JCPOA, in place,” Klor-Berchtold noted.

The German diplomat then hailed the “wise decision” taken by Iranian and European policymakers to keep the nuclear agreement alive.

Klor-Berchtold highlighted that all 28 member states of the European Union have unanimously voiced their support for the JCPOA, and have even a Blocking Statute entered into force on August 7 in a bid to mitigate the impact of US sanctions on the interests of EU companies doing legitimate business in Iran.

“European leaders are very well aware of the fact that maintaining payment channels is crucial. There are no easy solutions. Time, patience and creativity are needed. We will leave no stone unturned in our efforts to find concrete ways to continue economic cooperation with Iran,” the German ambassador said.

“European leaders appeal to Iran to continue to fully comply with its obligations under the JCPOA,” Klor-Berchtold underlined.

US President Donald Trump announced in May that Washington was pulling out of the JCPOA, which lifted nuclear-related sanctions against Tehran in exchange for restrictions on Iran’s nuclear program.

A first round of American sanctions took effect in August, targeting Iran’s access to the US dollar, metals trading, coal, industrial software, and auto sector. A second round, forthcoming on November 4, will be targeting Iran’s oil sales and its Central Bank.

Despite Washington’s withdrawal, Iran has not left the deal yet, but stressed that the remaining signatories to the agreement now had to work to offset the negative impacts of the US pullout for Iran if they wanted Tehran to remain in it.

Since the JCPOA Implementation Day on January 16, 2016, the IAEA has been monitoring Iran’s compliance with its nuclear-related commitments under the nuclear deal and has consistently verified the Islamic Republic’s compliance.