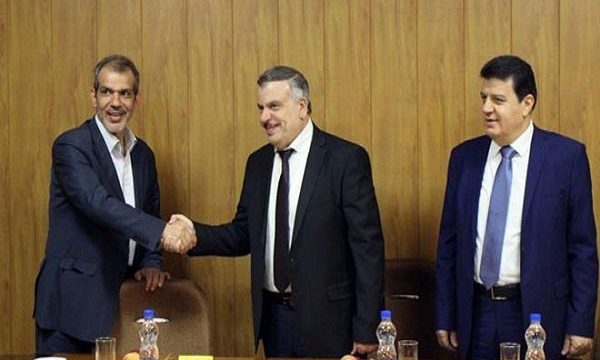 MNA – The required mechanisms to enhance strategic cooperation in the power sector were discussed during the meeting between Syrian Minister of Electricity, Mohammad Zuheir Kharboutli and Hassan Danaeifar, an advisor to First Vice-President of the Islamic Republic of Iran and chairman of the Iranian committee on the development of economic relations with Syria and Iraq.

During the talks, the two sides stressed the joint determination to take advantage of existing and available capabilities to build a full partnership between the Syrian and Iranian companies with the participation of the public and private sectors and adopt practical steps to achieve a quantum leap in the electricity sector.

Kharboutli pointed out the importance of the Aleppo Thermal Power Station and the need to maintain and rehabilitate it as the city of Aleppo is an important industrial city. “We are working hard to bring the station back to service with a capacity of 1065 MW,” SANA quoted him as saying.

He pointed out to the importance of cooperating with Iran Powerplant Repair Company (IPRC), saying that “the experience of this company will be used to support the electricity sector in Syria, and it was agreed to hold bilateral meetings between experts from both sides to examine the needs of the Syrian electricity sector.”

For his part, Danaeifar said that the Iranian companies are fully prepared to cooperate with the Syrian side in the electricity sector.

In a press statement following the talks, Danaeifar stressed the importance of power cooperation between Syria, Iran, Iraq, and Lebanon due to its economic importance for the region.