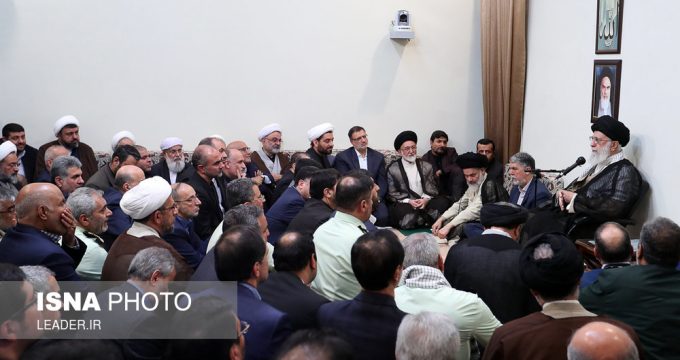 Ayatollah Khamenei made the remarks in a meeting on Monday with a group of Iranian officials in charge of organizing the Hajj pilgrimage.

The Leader noted that the gathering of Muslims at one specific time and place to carry out the Hajj pilgrimage conveyed such important political messages as “the necessity for boosting communication and synergism among Muslims,” while demonstrating the power of the Islamic Ummah.

Ayatollah Khamenei added that “establishing contacts with all Muslims through the Hajj,” “conveying the message of the Islamic Revolution to pilgrims from other countries and answering their doubts in this regard,” “laying the ground for bolstering the Islamic Republic of Iran’s contacts with other Islamic countries,” and finally “promoting brotherly coexistence among all Islamic sects” were the main political and necessary messages that must be conveyed to the entire Muslim world during the Hajj pilgrimage.

Leader of the Islamic Revolution Ayatollah Seyyed Ali Khamenei addresses a meeting with a group of Iranian officials in charge of organizing the Hajj pilgrimage in Tehran on October 1, 2018. (Photo by khamenei.ir)

Ayatollah Khamenei also strongly criticized extensive destruction of Islamic monuments like those, which are attributed to Prophet Mohammad (PBUH) and Imam Ali (PBUH), under the pretext of developing the Hajj.

“While various countries carefully protect their historical monuments and sometimes even fake certain artifacts to show off their history and their past, many Islamic monuments have been so far destroyed in [the Saudi cities of] Mecca and Medina,” the Leader said.

Ayatollah Khamenei also told the Iranian Hajj officials to come up with initiatives and contact Hajj officials in other Islamic countries in order to prevent destruction of the remaining Islamic monuments in Saudi Arabia.

In a message to Hajj pilgrims who began marking the climax of the annual event on August 20, Ayatollah Khamenei said the US policy is to stoke wars among Muslims and urged unity among them.

“Look at the behavior of the arrogant and criminal US today. Its main policy against Islam and Muslims is to stoke wars. Its desire and vicious effort is that Muslims massacre each other,” the Leader said.