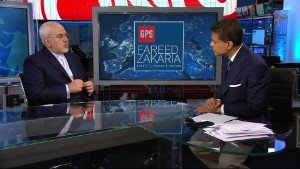 Zarif to appear on CNN tomorrow

‘On GPS tomorrow at 10 am and 1 pm ET on CNN: I’ll be joined by Iranian Foreign Minister @JZarif,’ Zakaria Tweeted on Sunday.

Zarif arrived in New York on September 23 along with the Iranian President Hassan Rouhani to attend the UNGA meeting.

On the sidelines of the UNGA’s 73rd session, Zarif also participated in the Nelson Mandela Peace Summit and held separate talks with P4+1 foreign ministers.

Zarif and the High Representative of the European Union for Foreign Affairs and Security Policy Federica Mogherini in their first joint statement after the US withdrawal from Iran nuclear deal underlined preserving the agreement as well as meeting Iran’s economic interests.

The Iranian foreign minister has so far held talks with his counterparts from Portugal, Germany, Sweden and South Korea.