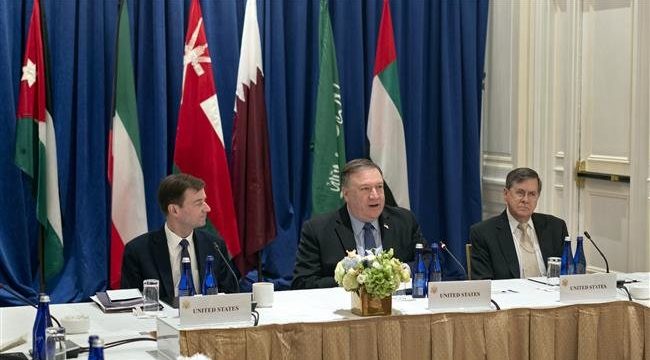 US hosts Arab FMs to push for anti-Iran alliance

Press TV – The United States hosted a meeting of top Arab diplomats in New York on Friday to push forward a plan to establish a NATO-like regional alliance to confront Iran.

US Secretary of State Mike Pompeo met with foreign ministers from Egypt and Jordan as well as six Persian Gulf Arab countries, including Saudi Arabia, the United Arab Emirates, Bahrain, Kuwait, Oman, Qatar, to discuss the formation of the so-called “Arab NATO.”

The State Department said in a statement that the participants in the meeting had all underlined “the need to confront threats from Iran directed at the region and the United States.”

The foreign ministers, the statement read, had “productive discussions” on creating what is to be known as the Middle East Strategic Alliance (MESA).

However, it is generally believed that a diplomatic standoff between Qatar and a Saudi-led quartet of countries is still hampering the formation of the anti-Iran alliance.

Following Friday’s meeting with Pompeo and other regional peers, Qatar’s Foreign Minister Sheikh Mohammed bin Abdulrahman Al Thani said that a regional alliance envisioned by the US would not work unless the issue of the Saudi-led blockade on Doha was resolved.

“This gathering is important. But we need to address the challenges among these countries,” he said, adding, “The real challenge facing the US-led alliance is to solve the [Persian] Gulf crisis.”

The Qatari foreign minister further stressed that there had been “no progress” in resolving the dispute with Saudi Arabia.

In June 2017, Saudi Arabia, Egypt, Bahrain, and the UAE imposed a land, naval and air blockade on import-dependent Qatar, accusing Doha of supporting terrorism, an allegation strongly denied by Doha.

The Saudi-led bloc presented Qatar with a list of demands and gave it an ultimatum to comply with them or face consequences. Doha, however, refused to meet the demands and stressed that it would not abandon its independent foreign policy.

Saudi Arabia “supports the new US strategy to counter Iran,” he said in an address to the 73rd session of the UN General Assembly in New York.

Back in May, Trump pulled the US out of the 2015 nuclear deal, known as the Joint Comprehensive Plan of Action (JCPOA), despite objections from other signatories of the accord.

Besides re-imposing the anti-Iran sanctions it had lifted under the accord, the Trump administration has also been seeking to discourage the European firms from doing business with Iran by threatening them with penalties.

Elsewhere in his address, Jubeir accused Qatar of supporting terrorism and harboring extremism, saying, “There was no other choice but to boycott it.”

Saudi Arabia is widely known to have been supporting some of the most dangerous terrorist groups in Syria and Iraq. The country is the birthplace of Wahhabism which has inspired such terrorist groups as Daesh and al-Qaeda.