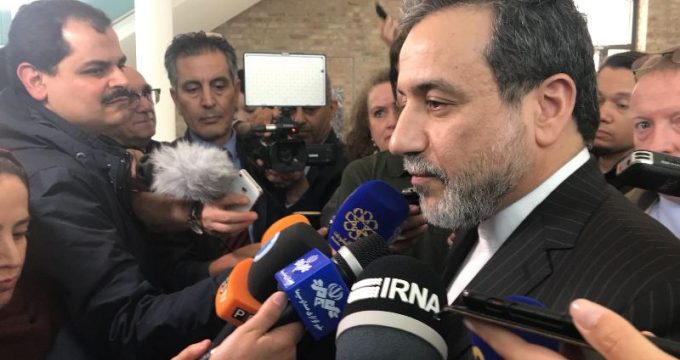 An Iranian deputy foreign minister made it clear for Europeans that their proposed mechanism for neutralizing the US oil and banking sanctions against Iran must be fully or partly carried out until at most November 4, when a new round of US sanctions officially takes effect.

Chinese Foreign Minister Wang Yi says the 2015 nuclear agreement Iran signed with major world powers is beneficial to the entire world and must be upheld.

The Iranian and Syrian foreign ministers met at the United Nations headquarters Friday evening and discussed the Astana peace process.

US hosts Arab FMs to push for anti-Iran alliance

The United States hosted a meeting of top Arab diplomats in New York on Friday to push forward a plan to establish a NATO-like regional alliance to confront Iran.

Official admits US cannot force Iran out of Syria

Neither Russia nor the US can force Iranians out of Syria as their presence is at the official request of the Damascus government, a senior US official said.

In a speech at the UN General Assembly Session on Friday in New York, German Foreign Minister highlighted the need to maintain trade with Tehran and said Europe unanimously stands by Iran in nuclear deal dubbed JCPOA.

Iranian Foreign Minister Mohammad Javad Zarif announced that so far, the central banks of seven European Union member states have agreed to create a special mechanism to facilitate financial transactions with the Islamic Republic during the era of US sanctions.

Turkey will not join US sanctions against Iran – Foreign Minister

Ankara will not uphold Washington’s sanctions against Tehran and will continue its trade with the Middle Eastern country, Foreign Minister Mevlut Cavusoglu told Sputnik.

Iran on Saturday authorized the central bank to intervene in the foreign exchange market, state television reported, after its rial currency fell to repeated record lows in recent weeks following the reimposition of U.S. sanctions.