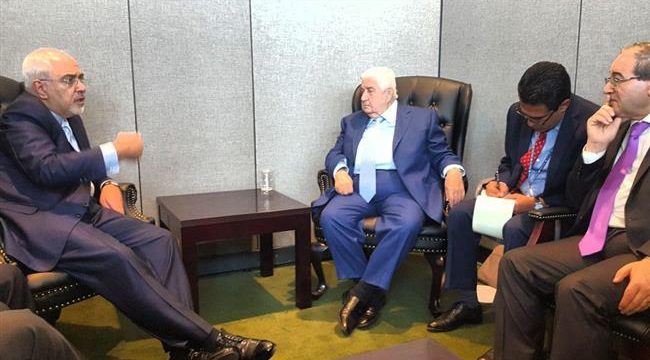 The meeting between Mohammad Javad Zarif and Walid al-Moallem took place on the sidelines of the 73rd session of the United Nations General Assembly in New York.

The two foreign ministers also discussed regional issues with Zarif underling the need to find a political solution to the crisis in Syria.

Earlier, Zarif held talks with foreign ministers of Group 4+1 as well as counterparts from other countries.

He also participated in the Nelson Mandela Peace Summit and held talks with the P4+1 foreign ministers.
On Thursday, Zarif met with his Omani and Indian counterpart and then participated in a tripartite session of Iran, Russia and Turkey.

The Asia Cooperation Dialogue (ACD) is an inter-governmental organization created on 18 June 2002 to promote Asian cooperation at a continental level and to help integrate separate regional organizations such as ASEAN, SAARC, the Persian Gulf Cooperation Council, and the Eurasian Economic Union.

Zarif’s Friday programs included meetings with his Algerian, Austrian and Dutch counterparts. He also
participated in a banquet given by the Qatari foreign minister.