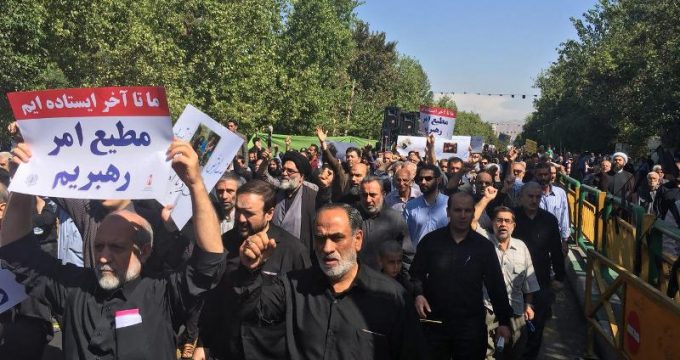 IRNA – Iranian worshipers at the Friday Prayers took part in a rally in Tehran in condemnation of the recent terrorist attack in the country’s southwestern city of Ahvaz.

The huge crowd of people in the Iranian capital rallied in the streets around the University of Tehran to condemn the indiscriminate terrorist attack in Ahvaz that killed 24 and injured at least 60 people.

The attack targeted a military parade and the bystanders, including women and children.

Demonstrators also shouted slogans against the US, the Zionist regime of Israel, and Saudi Arabia.

Before the Friday Prayers, the interim leader Mohammad-Ali Movahedi-Kermani in his second sermon had condemned the terrorist attack, saying such indiscriminate terrorist acts are the weapons of weak people who do not have the power of reasoning and good behavior to impress others, and therefore they resort to violence, terror, and murder.

A group, calling itself al-Ahwazieh, claimed the responsibility for the attack Saturday, September 22.