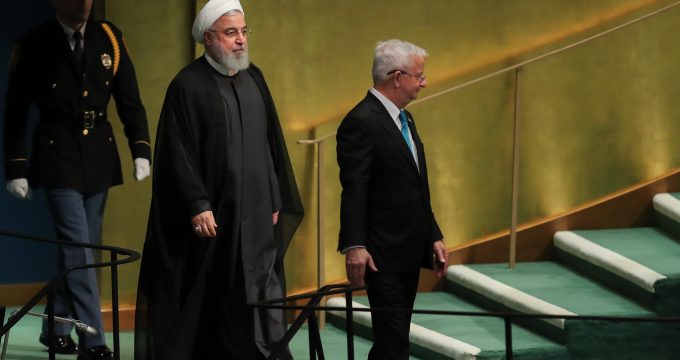 Iranian Diplomacy – The ‘legal and rational’ speech of Iranian President Hassan Rouhani at the United Nations General Assembly completely overshadowed the ‘offensive’ address delivered by his US counterpart, an international affairs expert said.

“Trump’s approach to international affairs was based on offensive realism,” Mahdi Motahharnia told IRNA, adding that the US president gave his UN speech as a ‘businessman politician’.

He said the two speeches were in marked contrast, adding that the Iranian president speech had a “stronger impression on international bodies despite having a smaller audience.”

Rouhani on Tuesday took the UN podium hours after Trump and called on the US to “come back to the negotiating table” as he slammed Washington for its hostile policy towards his country.

The Iranian president said the United States had waged “economic war” against Iran by reimposing unilateral sanctions, which were lifted under the country’s 2015 multinational nuclear deal that was abandoned by the US in May.

“The economic war that the United States has initiated under the rubric of new sanctions not only targets the Iranian people but also entails harmful repercussions for the people of other countries, and that war has caused a disruption in the state of global trade,” Rouhani said.

“What Iran says is clear: no war, no sanctions, no threats, no bullying; just acting according to the law and the fulfilment of obligations.”

Trump, in his annual UN speech, said he would keep up economic pressure on Tehran to try to force a change in its behavior.

Pointing to Trump’s hostile speech, Motahharnia said, “Today, the US government is not trying to portray a democratic image of itself in international system. What it seeks is a hegemonic and authoritarian image, particularly in security and economic fields.”

The expert said the world may at first laugh at some of Trump’s policies but “we should bear in mind that 30% of the world power is at the hands of the US and financial markets will react to Trump’s speech.”

Motahharnia was referring to the part of Trump’s speech that provoked derisive laughter from fellow leaders at the normally staid assembly when the US president trumpeted his performance under his “America First” policy.

Ali Khorram, an international affairs expert, also described Rouhani’s speech as ‘logical and diplomatic’, saying the president speech would have been a “loss if he had opted to answer back Trump’s rhetoric by rhetoric.”

“The world and the audience present at the UN had enough of Trump’s offences and boastful talks and were looking for someone to come and deliver logical, diplomatic and polite talks, and Rouhani’s speech had all those characteristics.”

Khorram said the Iranian president’s invite to negotiating table shows that he was careful not to get impressed by Trump’s speech.

“These words caused positive reactions all over the word.”

In his address, Rouhani stressed that “there is no better way but dialogue. However, dialogue is two-way: it should be based on equality, justice, and human integrity and honor, and conducted in accordance with the rules and norms of international law… We invite you (the US) to come back to the negotiating table you left.”

“For dialogue to take place, there is no need for a photo opportunity. The two sides can listen to each other right here in this assembly,” Rouhani said.