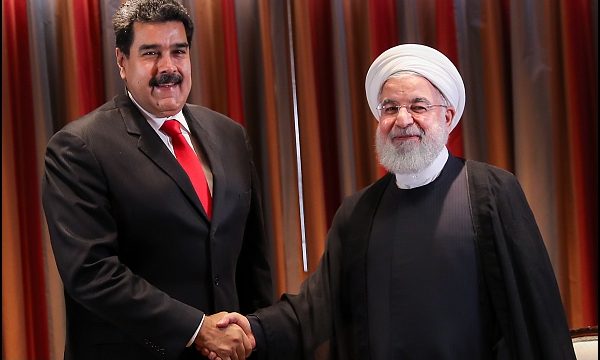 President in a meeting with his Venezuelan counterpart: A gov’t backed by people won’t surrender to threats

president.ir – President Rouhani stressed: “Today, the greatest responsibility of Iranian and Venezuelan officials is to work harder to develop relations and cooperation to serve the interests of the people and strengthen economies of the two countries”.

In a meeting with President Nicolas Maduro of Venezuela on Wednesday in New York, President Hassan Rouhani said, “The people of Iran and Venezuela have continuously been under the aggression and sanctions of the United States”.

He also referred to the United States’ illegal and unilateral withdrawal from the JCPOA, adding, “The Americans invite us for dialogue, and at the same time, are seeking to overthrow the system in Iran, thinking that if they put pressure on the people, they can achieve this goal; but they don’t know that a government that enjoys people’s support will not surrender to threat”.

“Today, independent countries should develop relations in all fields and resist enemies’ greed, proving them that the path they have taken is wrong,” he continued.

He went on to appreciate the Venezuelan government and nation’s condolences to the Iranian nation over the Ahwaz terrorist attack, and added, “Such incidents indicate that all countries around the world should be serious in fighting terrorism”.

At the same meeting, President Nicolas Maduro of Venezuela also said, “The enemies want to use terrorism as a means to dominate the interests of nations, and we should stand up to them”.

“Development of relations and cooperation between independent countries like Iran and Venezuela will lead to the defeat of the enemies, serving the interests of the two nations,” he continued.