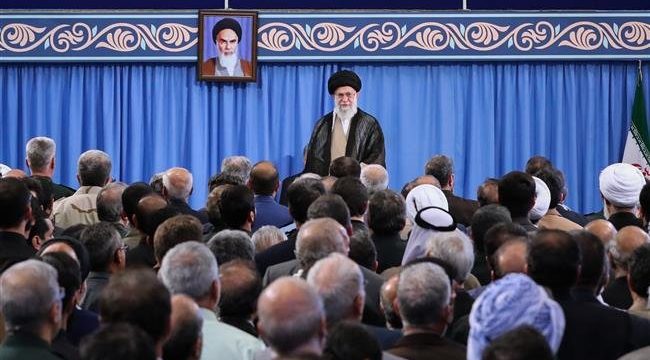 Press TV – Leader of the Islamic Revolution Ayatollah Seyyed Ali Khamenei has lashed out at Western countries for adopting a double-standard policy toward the use of Weapons of Mass Destruction (WMDs), reminding them of their support for slain Iraqi dictator Saddam Hussein in his war on Iran in the 1980s.

The Leader made the remarks on Wednesday in a meeting with a group of war-time commanders, veterans and artists on the occasion of the Sacred Defense Week marking the anniversary of the eight-year-long war on Iran.

Despite the West’s current “ballyhoo over accusations of using chemical weapons, they provided the Saddam regime with chemical weapons used not only in the war fronts but also in cities like Sardasht [against civilians],” Ayatollah Khamenei stated.

The Leader said the Islamic Republic was under economic and political sanctions in those years, and the Iranian nation’s voice could not be heard in the world as global media was “under the hegemony of Zionists.”

Referring to France and Germany’s support of the Iraqi regime during the war, the Leader said, “Why shouldn’t the French and German nations know what their governments did to the Iranian nation in those eight years?”

During the Iraqi-imposed war, “Iran was not even allowed to use the most basic equipment and facilities like barbed wires, while the other side was provided with the most modern war equipment and even chemical weapons,” he added.

Hundreds of thousands of Iranian people were killed in the eight-year war Saddam imposed on Iran and many more were affected by the chemical weapons like mustard gas used by the Iraqi regime.

Sardasht was the third populated city in the world, after Japan’s Hiroshima and Nagasaki, to be deliberately targeted with weapons of mass destruction. It was also the first city in the world to be attacked with poisonous gas.

Thanks to the support offered by the US and other Western states, Iraq once possessed a huge arsenal of chemical weapons.

Reports say the CIA knew about Iraq’s use of chemical weapons as early as 1983, but the US took no action against the violations of international law, and even failed to alert the UN.