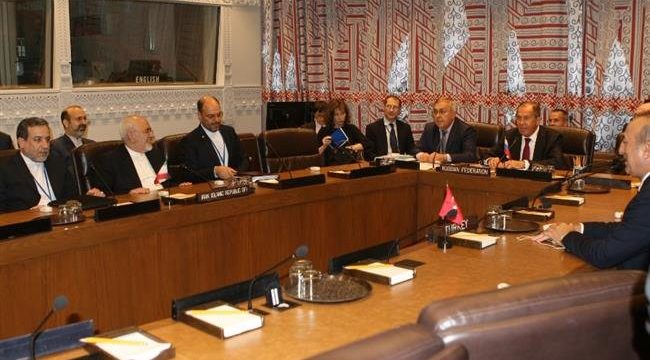 Press TV – Top diplomats of Iran, Russia and Turkey – which serve as guarantors of the Syria peace process – have sat down for talks in New York on the latest developments in the country’s Idlib Province, amid efforts to peacefully rid the area of terrorists.

Iranian Foreign Minister Mohammad Javad Zarif and his Russian and Turkish counterparts, Sergei Lavrov and Mevlut Cavusoglu, held a trilateral meeting on the sidelines of the 73rd session of the UN General Assembly in New York on Wednesday.

The Russian Foreign Ministry said the trio had hailed a recent Moscow-Ankara agreement to set up a buffer zone in Idlib, the last major terrorist-held bastion in Syria.

“The sides discussed in detail the situation on the ground, first of all in the Idlib de-escalation zone, and prospects for the launch of a really sustainable process of political settlement of the Syrian crisis,” the ministry said in a statement.

“Participants in the meeting highly assessed the agreements on the stabilization of the situation in Idlib that were reached in Sochi on September 17. These agreements make it possible to protect civilian populations while continuing uncompromised fight against terrorists,” it added.

Earlier this month, Turkish President Recep Tayyib Erdogan and his Russian counterpart Vladimir Putin met in the Black Sea resort of Sochi and announced an agreement on Idlib.

The deal stipulates a demilitarized zone of 15-20 kilometers in Idlib along the contact line between the armed opposition and Syrian government troops by October 15. It also involves the withdrawal of “radically-minded” militants, including the al-Nusra Front, from the region.

Elsewhere in its statement, the Russian Foreign Ministry said Zarif, Lavrov and Cavusoglu had, during the meeting, reiterated their commitment to the formation of a constitutional committee aimed at enabling “Syrians to decide about the future of their country by themselves.”

Iran, Russia and Turkey are operating as guarantors of the Astana process, a track of negotiations which have resulted in the return of a succession of militant strongholds to the government fold and movement of civilians to safe zones.

The latest Turkey-Russia deal has suspended a Syrian military operation to liberate the city.

Tehran and Damascus have both welcomed the agreement.

On Thursday, militant sources in Syria expressed confidence that their Takfiri rivals would leave the Idlib demilitarized zone, Reuters reported.

A militant fires a portable recoilless rocket launcher during a mock battle at a camp in the countryside of Idlib Province, Syria, August 14, 2018. (Photo by AFP)

A senior militant official said Tahrir al-Sham, the most powerful Takfiri terrorist group in Idlib, had sent secret feelers to the Turkish army in the last few days signaling they would comply with the buffer zone deal.

“Matters are moving well and Tahrir al-Sham has pledged it is going to implement but without announcing its agreement,” the source added.

Ahmed Toma, another militant figure, said that he expected Tahrir al-Sham to honor the Idlib deal and dismissed risks of a showdown.

“I foresee it will be implemented within the time set,” he said.

Moreover, Abdul Salam Abdul Razzak, a leading figure in the so-called National Liberation Front (NLF), an alliance of militant factions supported by Ankara, stressed that he did not expected “any hurdles in implementation” of the Idlib agreement.

Iran will remain in Syria: Rouhani

Observers say any potential Syrian military operation in Idlib would be Syria’s “final battle” against terrorists.

Thanks to Iranian and Russian help, Syrian government forces have liberated most of the areas captured by foreign-backed militants across the Arab country.

During his meetings in New York, Iranian President Hassan Rouhani emphasized that Iran would maintain its military advisory role in Syria for as long as the Damascus government wanted it there.

“Our presence in Syria will continue for such time that the Syrian government requests our presence,” Rouhani said at a press conference in New York on Wednesday.

He further noted that Iran was not seeking conflict with the US in the Middle East and questioned American forces’ presence in the region.

“We do not wish to go to war with American forces anywhere in the region,” Rouhani said. “But we ask the United States to adhere to laws and to respect national sovereignty of nations.”

Tehran has been offering military advisory assistance to the Syrian army at the request of Damascus, enabling pro-government forces to speed up their advances against terrorist groups.

The US and Israel, whose interests are at stake in Syria, have repeatedly called for an end to Iran’s mission in the Arab country.