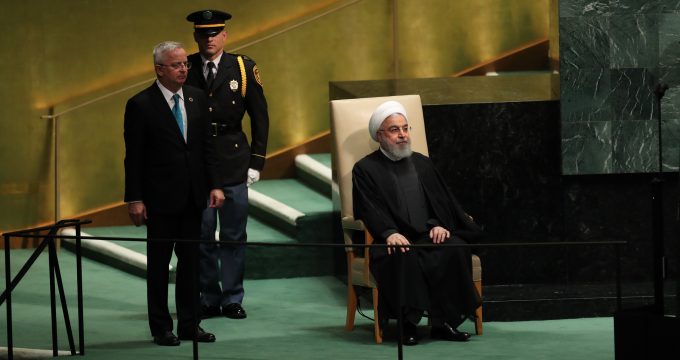 Press TV – Iranian President Hassan Rouhani says “unilateral and illegitimate” sanctions imposed by the United States against the Islamic Republic are tantamount to “economic terrorism” and are in violation of world nations’ right to progress.

“Unlawful unilateral sanctions in themselves constitute a form of economic terrorism and a breach of the ‘Right to Development.’ The economic war that the United States has initiated under the rubric of new sanctions not only targets the Iranian people but also entails harmful repercussions for the people of other countries, and that war has caused a disruption in the state of global trade,” Rouhani said in his address to the 73rd session of the United Nations General Assembly in New York on Tuesday.

He added, “The Iranian people have demonstrated their unwavering resilience during the past forty years despite the difficulties and constraints caused by sanctions, and have shown that they can overcome this difficult phase as well. The multi-millennial history of our country demonstrates that Iran and Iranians have never broken in the face of a storm of events—not even been bowed.”

Rouhani further noted that the US policy vis-à-vis the Islamic Republic of Iran has been wrong ever since the Islamic Revolution emerged victorious back in 1979.

The Iranian president stated that Washington’s approach of resisting the wishes of the Iranian people is doomed to failure.

“The policy of engagement and cooperation with Iran has produced positive outcomes for other nations, as best reflected in Iran’s cooperation with friendly countries in the fight against terrorism.

“The US understanding of international relations is authoritarian. In its estimation, might makes right. Its understanding of power, not of legal and legitimate authority, is reflected in bullying and imposition. No state and nation can be brought to the negotiating table by force, and if so, what follows is the accumulation in the ‘grapes of wrath’ of those nations, to be reaped later by the oppressors,” Rouhani pointed out.

The Iranian president then advised American statesmen to engage in dialogue and negotiation, stressing that dialogue is a two-way process that should be based on equality, justice, human integrity and honor, and conducted in accordance with the rules and norms of international law.

He went on to say that the world is currently suffering from the recklessness and disregard of some states for international values and institutions.

“This illusion should be cast away, once and for all, that one can aspire to securing more peace and security at the cost of denying others’ peace and security. Negligence or ineffectiveness of international institutions can endanger world peace. Those seeking dominance and hegemony are enemies of peace and the perpetrators of war,” the Iranian president said.

He underlined that the incumbent US administration seems determined to render all international institutions unproductive,

“This government, having withdrawn from a multilateral agreement adopted by the Security Council, in contravention of the rules and norms of international law, invites the Islamic Republic of Iran to bilateral talks… It is ironic that the US government does not even conceal its plan for overthrowing the same government it invites to talks!” Rouhani commented.

The Iranian president went on to say that Tehran’s foreign policy has always been based on multilateralism and in compliance with the established principles of the international law.

“Based on 12 consecutive reports of the International Atomic Energy Agency (IAEA), Iran has complied with all of its commitments. The United States, however, has not stayed faithful to its obligations from the very beginning,” Rouhani said.

He emphasized that the United States is pushing other countries to violate the JCPOA, and that it is threatening all countries and international organizations with punishment if they comply with the Security Council resolution 2231.

Rouhani said Iran, as a victim of terrorism, will always remain in the forefront of genuine confrontation with terrorism.

“In Iran we have condemned all acts of terrorism without equivocation and will continue to do so.  We welcome the strong statement from the Security Council on this issue. But why can leaders of terrorist operations live and operate freely in Western countries, and even openly solicit funds?  Are these activities not in violation of international counter-terrorism norms?” the Iranian president said.

He said Iran has repeatedly warned against any foreign intervention in the internal affairs of Syria and the use of unlawful means, including supporting extremist and terrorist groups, to exert pressure on the Damascus government.

“It (Iran) has consistently emphasized that the crisis can only be resolved through intra-Syrian dialogue. The presence of our military advisors in Syria is at the request of the Syrian government and consistent with international law. It is aimed at assisting the Syrian government in the fight against extremist terrorism. Iran, Russia, and Turkey, in cooperation with the government of Syria and other Syrian parties, have succeeded through the Astana talks to play a positive role in reducing tensions in Syria. They managed to prevented escalation and bloodshed in Idlib as part of their last collective effort,” Rouhani said.

He underlined that the ongoing crisis in Yemen can be resolved solely through intra-Yemeni talks and without foreign interference.

The Iranian president also made a reference to the Palestine issue, stating that Israel’s innumerable crimes against the Palestinian nation would have been impossible without the military, political and propaganda support of the United States.

“We believe in the formation of a collective mechanism for the Persian Gulf region with the presence and participation of all regional countries. The security of the Persian Gulf and the Strait of Hormuz has always been important for us,” noted.

“The Islamic Republic of Iran is the same state that was on the forefront of the fight against Taliban terrorism, and paid in blood for this end. We fought against Al-Qaeda and the Taliban before the attacks on New York.

“The Islamic Republic of Iran is the same state that fought against Daesh – a fake and distorted representation of Islam. We were engaged in the fight against Daesh before their attacks in Paris, London and Brussels. World will not have a better friend than Iran, if peace is what it seeks,” Rouhani concluded.