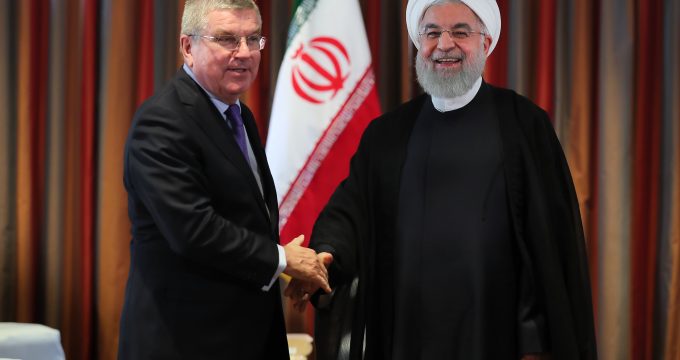 MNA – Iranian President Rouhani stressed creating equal opportunities for men and women in various fields of social activities, including sports, in a meeting with president of the International Olympic Committee.

Iranian President Hassan Rouhani met with President of the International Olympic Committee Thomas Bach on Monday evening on the sidelines of the United Nations General Assembly in New York.

“Despite the independence of federations from the government, we always support sports and athletes in our country,” he maintained.

The president stressed creating equal opportunities for men and women in various fields of social activities, including sports, saying “fortunately, in the last five years, Iranian women have had a strong presence in various fields and have had an important role in politics and management positions.”

President of the International Olympic Committee Thomas Bach, for his part, offered condolences over the terrorist attack on a military parade in Ahvaz on Saturday, which killed 24 people and injured 60 others, including civilians.

He went on to add, “Iran’s sport has made tremendous progress in recent years and has created great opportunities for Iranian women to appear in various sports fields.”