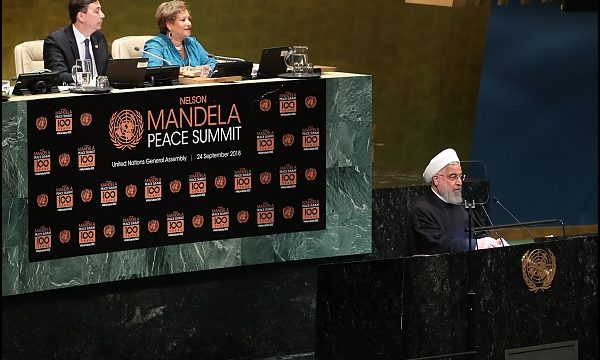 Pres. Rouhani: Remedy for violence, hate must be sought in dialogue

IRNA – Iranian President Hassan Rouhani said on Monday that the remedy for racism, xenophobia, violence and hate must be sought in dialogue, tolerance and democracy.

The Iranian President made the remarks addressing Mandela Peace Summit held on the sidelines of the 73rd UN General Assembly Session in New York.

Mr. President,
Commemorating the centenary of the birth of Nelson Mandela on the day that stands for global peace is praiseworthy on the part of the General Assembly of the United Nations.

Nelson’s Mandela long and formidable journey to freedom, from birth to growth in a small tribe to joining the anti-racism movement which resulted in long years of imprisonment and ultimately regaining freedom and ascending to presidency are distinctive and unique in the contemporary history.

Mandela was a close and loyal friend of the Islamic Republic of Iran. During the years before the victory of the Islamic Revolution, the then royal regime of Iran had established very strong relations with the Zionist entity and the apartheid regime which were among the closest allies of the United States. Iran in those years was the main supplier of energy for both regimes.

However, after the victory of the Islamic Revolution, the Iranian government, inspired by the will of its people to support the liberation movement of South Africa, severed all its relations with both the Zionist and apartheid regimes. Following the collapse of the Apartheid regime and the establishment of democracy in South Africa, the relations between Iran and South Africa entered a new phase which is increasingly developing.

The suffering of the hard times of struggle did not force Mandela to abandon his method which was based on the pursuit of peace and accord. And Mandela’s treatment with his enemies and opponents after release from prison was so merciful that he sowed the seeds of amity and compassion in their hearts.

This is a historical reality that great statesmen tend to build bridges instead of walls. As racism, racial discrimination and xenophobia would make it easier to build walls and not bridges among the nations, dialogue, tolerance and peaceful co-existence constitute the building blocks of bridges between differences and divisions. I am courageous enough to declare that Nelson Mandela was one of the greatest men in contemporary history who considered the establishment of peace and friendship as an absolute necessity than mere expediency.

The Islamic Republic of Iran, during the past decades has presented before this august forum inspiring initiatives as “Dialogue among Civilizations” and “World Against Violence and Extremism” in line with strengthening multilateralism and developing international peace and cooperation. Iran remains firm and resolute in its intention and warmly shakes the hands of all pro-peace and pro-tolerance leaders.

The remedy for racism, xenophobia, violence and hate must be sought in dialogue, tolerance and democracy. This is the same path Mandela has bravely demonstrated to real and genuine statesmen. The name and memory of this great man shall live eternally through history. May his soul rest in peace.