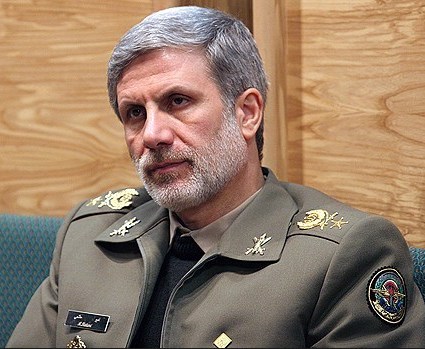 IRNA – Iran’s Defense Minister vowed Monday that the country will take revenge against the terrorists who killed scores of people in southwestern Iran.

Iranian people have proved over the past 40 years that they will not retreat from their cause and firm beliefs, Brigadier General Amir Hatami said on the sidelines of a funeral procession held for those who were killed in a terrorist attack in the capital city of Khuzestan Province, Ahvaz.

Such indiscriminate, inhumane and worthless acts will not affect the determination of Iranian people in realizing the sublime goals of the revolution, the minister said.

The global arrogance headed by the US, the Zionist regime of Israel and their regional followers have resorted to the terrorist groups to pursue their vicious aims, the defense minister said.

He described the terrorist attack as the continuation of economic war of the US with the Treasury Department at the command center.

The terrorist attack targeted Saturday a military parade and the civilian bystanders in the southwestern city of Ahvaz. At least 25 people, including children and women, were killed and some 60 people were injured by the terrorists.

A group, calling itself al-Ahwazieh, has claimed responsibility for the attack.