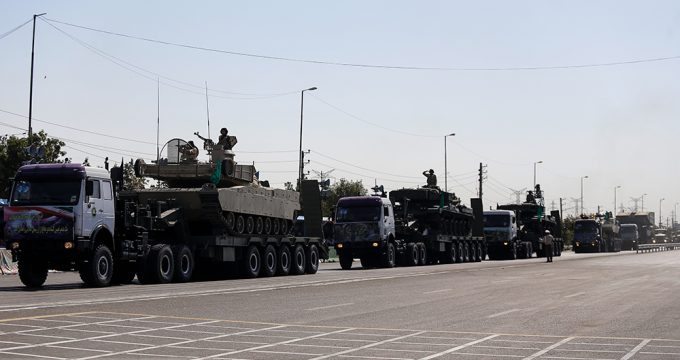 IRAN – The Islamic Republic Armed Forces and Khatam ul-Anbiya airbase unveiled their latest defensive achievements on September 22 in a parade to mark the 38th anniversary of the beginning of the country’s eight years of war imposed by the Ba’ath regime of Iraq.

Latest version of Zulfaqar tanks as well as the latest air defense systems, protective armored systems, auto-cannons, and reconnaissance vehicles was among the achievements of the Ground Force of the Islamic Republic of Iran’s Army demonstrated during the parade.

Meanwhile, the Khatam ul-Anbiya airbase unveiled Sayyad-3 missiles, Talash system and its launcher, Mersad launcher system and its affiliated radar systems as well as the Fakour command and control systems.

Some IRIAF squads performed an air show during the parade.

The 38th anniversary of the Sacred Defense (Iraq’s imposed war 1980-1988) was marked in Tehran during a ceremony held at the mausoleum of Founder of the Islamic Revolution the late Imam Khomeini in south of the Iranian capital.

The same ceremony also took place in other Iranian cities.