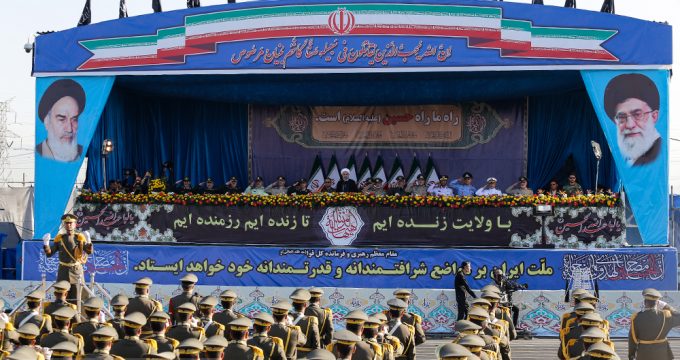 MNA – The Armed Forces of the Islamic Republic of Iran marked the beginning of the Sacred Defense Week by military parades in President Rouhani’s presence.

President Hassan Rouhani took part in the ceremony that was held on Saturday at the tomb of the Great Founder of the Islamic Revolution Imam Khomeini (RA).

The President is set to deliver a speech at the ceremony in a few minutes.

The Iranian Revolutionary Guards and army carried out a joint rehearsal aerial military drill in the Persian Gulf on Friday.

Deputy Commander of the Army Forces of the Islamic Republic of Iran for Publicity Affairs Colonel Yousef Safipour said yesterday that “in addition to showcasing high military power of the Islamic Republic of Iran, this war game conveys the message of peace and friendship to the neighboring states, adding, “if enemies wage military actions against Iran, they will definitely receive a crushing blow.”