MNA – The Iranian Foreign Minister Mohammad Javad Zarif has lashed out at the US special envoy for Iran Brian Hook for calling the JCPOA ‘a personal agreement’, stressing that the nuclear deal is an international treaty approved by UNSC.

The US special envoy for Iran Brian Hook said yesterday the Iran nuclear deal also known as the Joint Comprehensive Plan of Action (JCPOA), from which his country withdrew in May, was ‘a personal agreement’, adding that the United States seeks a nuclear ‘treaty.’

Today, Zarif posted a tweet, saying “US calls JCPOA a personal agreement between two governments, claiming it ‘seeks a treaty’.”

Zarif described Hook’s comments as “wrong,” saying that the JCPOA is “an international accord enshrined in a UN Security Council resolution.”

The Iranian foreign minister further noted that “US has violated its treaty obligations too and faces two lawsuits in the International Court of Justice.

“Apparently, US only mocks calls for peace,” added Zarif. 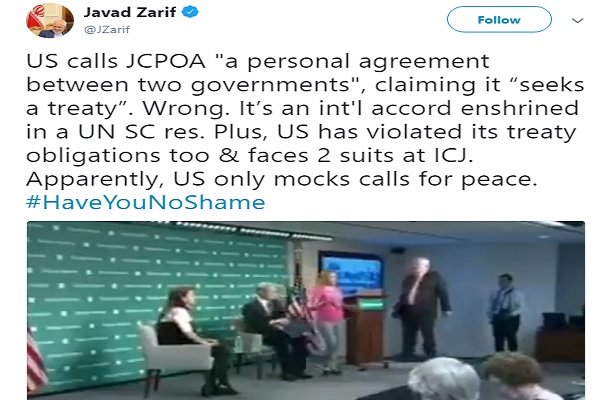