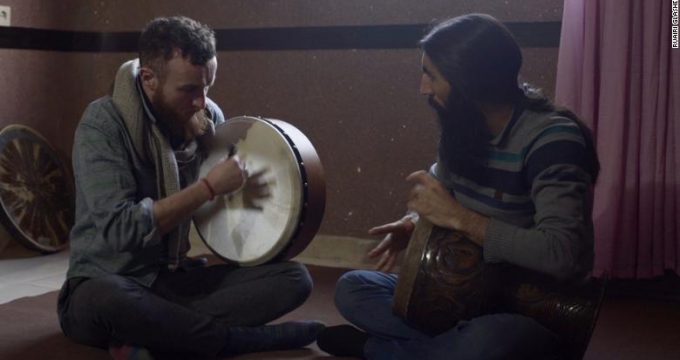 CNN | Ruairi Glasheen: I first encountered the tonbak — Iran’s indigenous drum — as a student, when I heard it on an old LP I found in a dusty corner of the library at London’s Royal College of Music. Instantly, I was hooked.

A small, goblet-shaped drum, the tonbak is rarely seen or heard outside Iran, but it drives the fast and frenetic rhythmic intensity of Persian classical music. 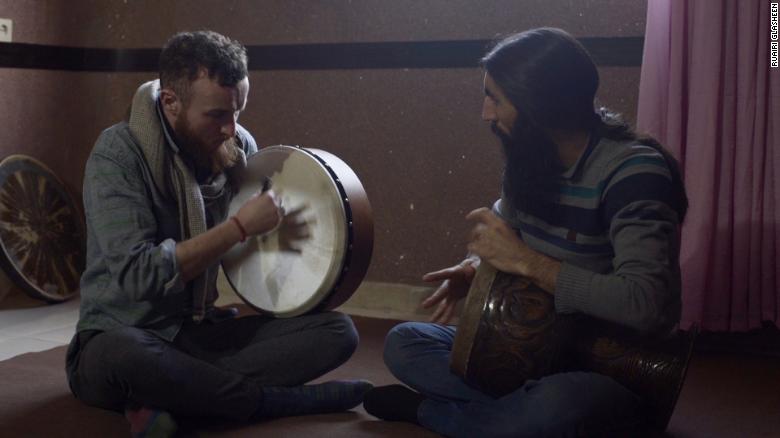 The tonbak is usually made of walnut, ash or pear wood and topped with a thin piece of camel or goat skin. Musicians play with their hands, sitting down with the drum resting sideways across their legs.
Earlier this year, I traveled to Iran in search of the tonbak and to make The Hidden Drummers of Iran — a crowdfunded documentary film about my quest.
In Esfahan, a historic city in central Iran, I met renowned tonbak player Jafar Ghazi Asgar, who runs a music academy with his wife, Melika Davoodi. According to Davoodi, young tonbak players are drumming life into this ancient art form — thanks in part to Instagram. Google, Facebook and Twitter are banned in Iran, but Instagram is permitted and provides a haven for young players to share their music. 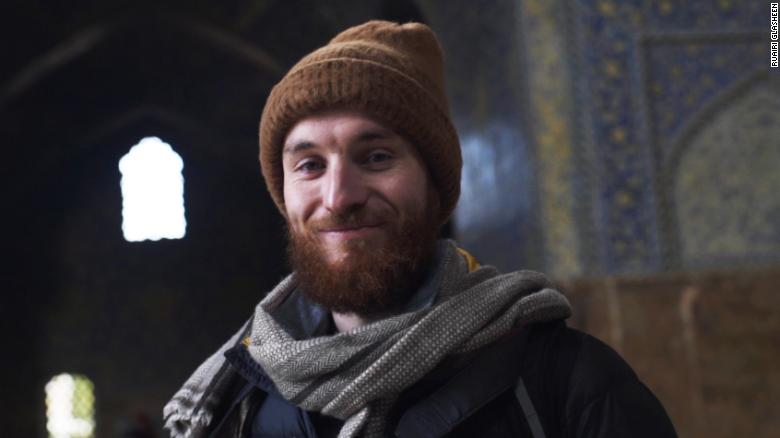 Beyond formal drumming techniques, tonbak players have — over the instrument’s long history — devised a seemingly limitless range of deviations using different parts of the hands, fingers and nails to create entrancing solos and accompaniments. The modern generation’s top players have taken innovation a step further, incorporating elements of melody by applying pressure to the drum’s skin with the right hand and producing melodic phrases with the left. I was astounded by the tonbak’s versatility — it can produce enough different sounds for an entire solo concert, from chilled out grooves to high-speed, virtuoso finger work.

The tonbak through time

The story of the tonbak drum tracks Iran’s political, cultural and social history.
In its earliest form, the drum was used to accompany Zoorkhaneh, a traditional system of fitness training that dates back to Iran’s pre-Islamic era and is still widely practiced today.
The drum took on a more refined shape and sound during the Qajar dynasty (1794-1925), when Iran’s classical music tradition — as we know it today — was established.
In 1925, Reza Shah toppled the Qajar rulers and seized power. He instituted a radical program of modernization which introduced musical influences from the West. Symphony orchestras and performers playing Western musical instruments were showcased alongside the country’s indigenous music. 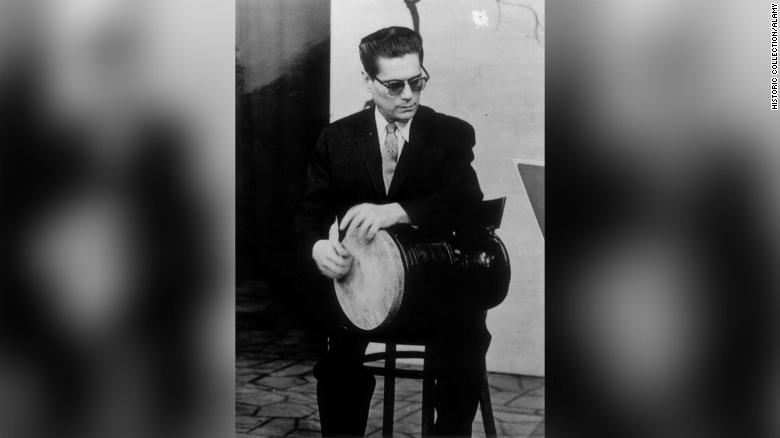 During this period, the tonbak thrived in the capable hands of Hossein Tehrani. A virtuoso performer, Tehrani lifted the tonbak from its traditional role as part of a musical ensemble and inspired audiences to regard it as a solo instrument.
But in 1979, when religious leader Ayatollah Khomeini overthrew the monarchy and set about transforming Iran into a theocratic Islamic state, the tonbak’s fortunes took a tumble.
Music was mostly restricted to pro-regime revolutionary songs and live performances and television broadcasts featuring musicians were prohibited. The number of active tonbak players dropped and the drum’s development skipped a generation.
It was not until the end of the Iran-Iraq war in 1988, when these socially conservative restrictions were relaxed, that the country’s indigenous music started to make its long-awaited comeback. 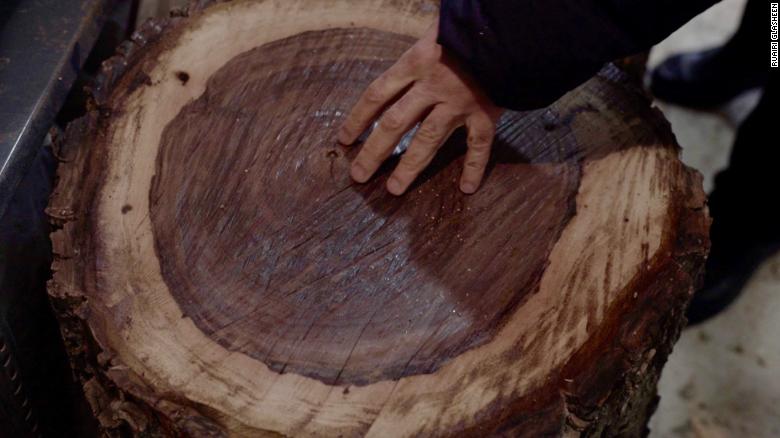 Today, Iran’s tonbak drumming scene is thriving. There are more and more places for young people to learn to play instruments and perform and a growing number of professional percussionists.
Javad Alirezaei, a rising star of the Iranian classical music scene, told me that mastering the tonbak is a long process that requires finding a teacher willing to take you under their wing, prayer and a lot of practice. 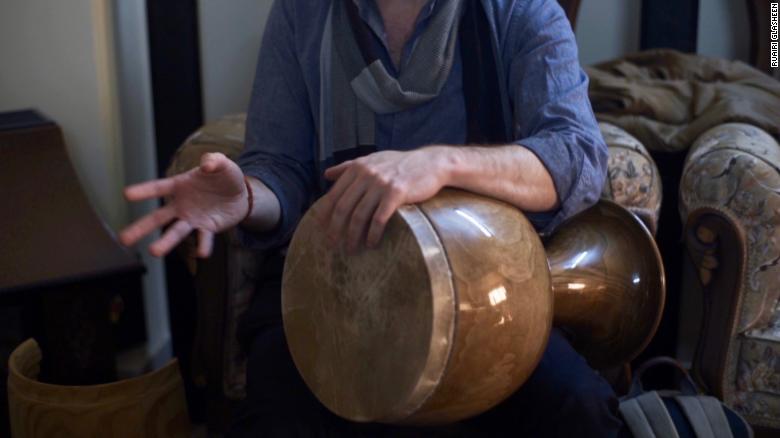 Players undertake rigorous training, which starts in childhood. Most will study for an extensive period with a master musician until they are ready to enter the profession as concert artists.
Alirezaei’s dedication is evident when he performs — his hands glide across the drum at an astonishing speed to create beautiful music filled with passion and personality. 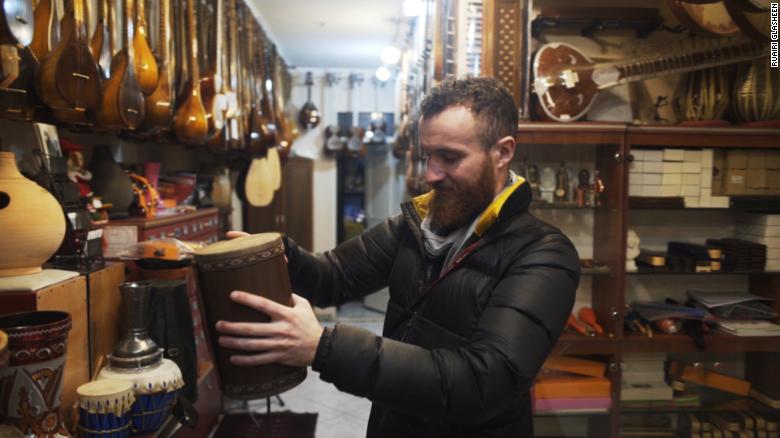 Browsing the Iranian classical instruments on sale in a Tehran shop.

Feeling inspired, I decided to buy a tonbak of my own and in Tehran, visited the workshop of master craftsman Keyvan Taheri. Each new tonbak must be correctly tuned to achieve its maximum sound potential in the the environment it will inhabit. As my drum was going to London, with its relatively cold and damp climate, Taheri tuned it higher than usual by stretching the skin extra tight.
On my journey, I discovered that the current generation of tonbak makers and players are making tremendous efforts to preserve and promote a rich and ancient tradition. Their respect for the past combines with a responsiveness to current tech trends to make the tonbak more popular than ever, as waves of young players beat an exciting path in the instrument’s evolution.
arts, drum, iran's music, tonbak September 19, 2018
Iran, Britain hold consular meeting
Iranians respond to MEK troll farm: #YouAreBots