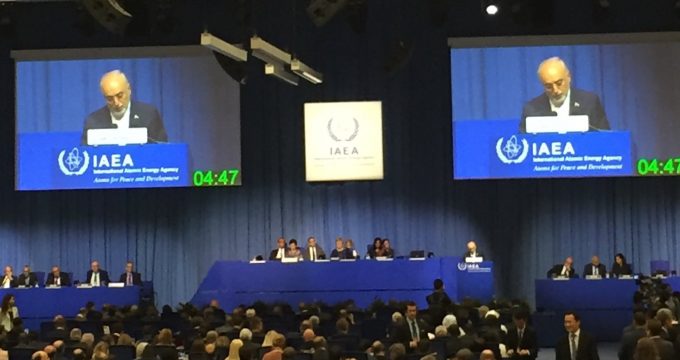 Head of the Atomic Energy Organization of Iran (AEOI) Ali Akbar Salehi said the reaction of the global community to Washington’s withdrawal from the JCPOA raises serious doubts about validity and wisdom of the American policy.

Members of the anarchist group Rouvikonas attacked the Iranian embassy in Athens with bottles of paint early on Monday morning.

Iranian foreign ministry spokesman says foreign ministers of Iran and other parties to the 2015 nuclear deal are likely to hold a meeting on the sidelines of this year’s UN General Assembly in New York to discuss efforts to salvage the nuclear pact.

Iran has received new proposals from Europe that would potentially meet its demand for practical guarantees for continued trade and keep Iran in a nuclear deal with five world powers, says the Iranian Foreign Ministry spokesman, amid attempts by the United States to derail that agreement.

Iraq no base for anti-Iran attacks: New parliament speaker

The newly-elected speaker of the Iraqi legislature says he won’t tolerate efforts by anti-Iran groups to use Iraq’s soil to attack the Islamic Republic.

Iranian Supreme Leader’s top aide for international affairs Akbar Velayati underlined that his country along with Russia and Turkey (as guarantors of peace in Syria) are in favor of returning the terrorist-occupied Idlib province to the Syrian government without shedding any blood.

There will be consequences as a result of the United States’ sanctions on Iran’s oil industry which are due to be re-imposed in November, Russian Energy Minister Alexander Novak has said.

Iran has always supported the Muslims in the world, said the spokesman of the Iranian Foreign Ministry on Monday.