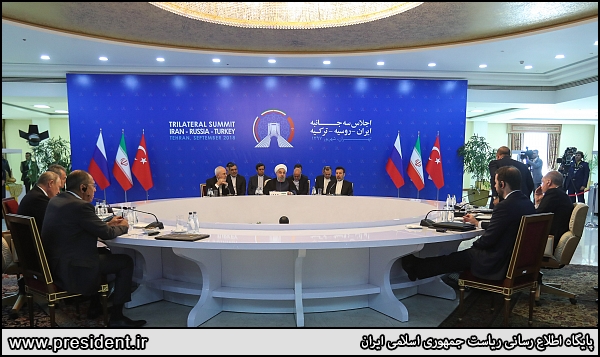 Tasnim – A Finnish political economist and author hailed a recent meeting of the presidents of Iran, Russia, and Turkey in Tehran about the Syrian crisis and said the Islamic Republic has played “a very constructive role” in the Arab country.

“Iran is playing a very constructive role in Syria which the Tehran summit again reaffirmed,” Jon Hellevig said in an interview with Tasnim.

“Iran’s brave stance in being the first country to jump to Syria’s defense must actually be seen in the bigger picture of protecting world freedom,” he added.

Jon Krister Hellevig is a Finnish lawyer and businessman who has worked in Russia since the early 1990s. Hellevig was a candidate in the European parliament election in 2014. He is the managing partner of the Moscow-based law company Hellevig, Klein & Usov. Hellevig has written several books, including Avenir Guide to Russian Taxes (2002, 2003, 2006 English and Russian editions); Avenir Guide to Labor Laws (2002, 2003, 2006 English and Russian editions). Expressions and Interpretations, a book on the philosophy of law and the development of Russian legal practices; Hellevig takes actively part in public discussion of current affairs and social structure contributing with articles and commentary in the media. He regularly lectures at international seminars on various topics.

Tasnim: As you know, a trilateral summit was held in Tehran on Friday between Iranian President Hassan Rouhani and his Russian and Turkish counterparts, Vladimir Putin and Recep Tayyip Erdogan, about the Syrian crisis. According to Iranian Foreign Ministry Spokesman Bahram Qassemi, the summit was not expected to resolve all issues surrounding the prolonged crisis in Syria but it aimed to facilitate more steps to combat terrorism and restore tranquility to the Arab country. What do you think about the success of the summit as well as Iran’s regional role?

Hellevig: Iran is playing a very constructive role in Syria which the Tehran summit again reaffirmed. Iran’s brave stance in being the first country to jump to Syria’s defense must actually be seen in the bigger picture of protecting world freedom. If Syria had fallen, then the New World Order project of the US elites would have taken a giant step forward. Russia would have been immediately threatened. Good thing that Russia realized that before it was too late and joined Iran in the defense of Syria. The most important outcome of the summit – of what we can know in public – is that it shows that Iran and Russia are now strategic allies in the Middle East.

Tasnim: The tripartite talks came as Syrian forces continue to reclaim much of southern parts of the country and are poised to soon launch an offensive in Idlib, one of the last remaining areas outside of Damascus’ control. What is your assessment of the summit’s impact on the military developments in Syria?

Hellevig: The wild card here is Erdogan. I have tried hard to get to the bottom of where Turkey stands on Idlib, have read up to see what the other important geopolitical observers have made of that, but preciously little of weight has been said on the topic. We simply don’t know. Well, actually we know what is Erdogan’s position – to retain a foothold in Idlib – but we don’t know if he is willing to back off for the sake of larger geostrategic considerations. Russia and Iran will walk the extra mile to get Erdogan on board, but at the end of the day, Idlib must – and will – be freed.

Tasnim: During his remarks at the summit, President Rouhani deplored the Washington government’s negative role in the ongoing crisis in Syria and said the “illegal” military presence of the US will only “increase the problems that already exist in the country”. What do you think about the US military presence and its bonds with terror groups in Syria?

Hellevig: The whole Syrian war is a witch’s brew concocted by the United States, Israel and their Saudi ally. They were pursuing two parallel goals, to get hegemonic control of the Middle East to neutralize Iran and extend the US encirclement of Russia from that direction, and to pursue the Greater Israel project by invading parts of Syria and eventually Lebanon. I would rather consider the terrorists there as US mercenaries, mercenary terrorists. Naturally, most of the rank and file terrorists in their stupidity would not understand that they are pawns in the great game, but their leaders obviously do. The US has organized, controlled, aided and abetted the various terrorist groups in the quest to destroy Syria for the sake of US geopolitics and Israel enlargement. That’s what I think about the US bonds to these terror groups, their guys. If somebody was still skeptical about that, then the pathetic support by the US to the terrorists entrenched in Idlib should dispel the last doubts.

At the same time as the mercenary terrorists have been doing America’s bidding in Syria, they have also served as the pretext for the US military to illegally occupy parts of Syria, supposedly for the purpose of fighting these same terrorists. Sardonically saying, they have had surprisingly little success in that. The terrorists thrived there and gained ground, until Russia came and wiped them out just like that.