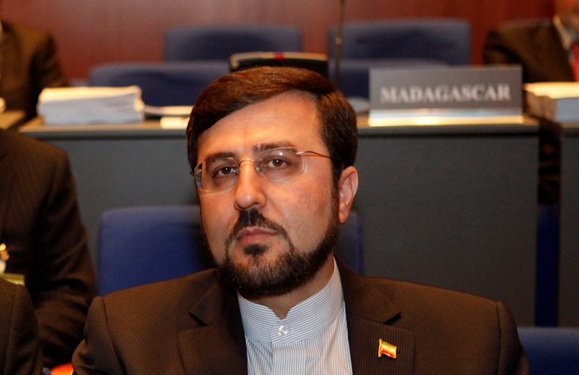 Secretary of Iran’s Supreme National Security Council (SNSC) Ali Shamkhani warned that any hostile move and threat against the country will receive a much stronger response.

High-ranking Iranian and Russian officials in a meeting in Tehran on Monday discussed issues related to the 2015 nuclear deal and ways to keep the internationally-accepted agreement alive.

International Atomic Energy Agency (IAEA) Director General Yukiya Amano says Iran is living up to all its commitments under the 2015 nuclear deal.

The Managing Director of Iranian Defense Ministry’s Marine Industries Organization Rear Admiral Amir Rastegari recounted that Iran will unveil newly-made marine vessels and equipment by the end of the year.

As Russia has warned planned false flag operations in Syria since late August, US National Security Adviser John Bolton said on Monday that the United States, Britain and France had agreed that any use of chemical weapons by Damascus would result in a much stronger response compared to previous incidents.

Turkey, Russia and Iran have reached an “agreement in principle” on the lists of Syrian government and opposition lists to form a constitutional committee.

Iran’s ambassador to Vienna-based international organizations, Kazem Gharibabadi, said the remaining parties to the 2015 nuclear deal known as the Joint Comprehensive Plan of Action (JCPOA) should ensure that the deal would serve the Islamic Republic’s interests.

A senior Iranian official has discussed the latest developments in the Middle East, particularly the ongoing crises in Yemen and Syria, with top European diplomats.

A group of Iraqi youths from the southern city of Basra have symbolically cleaned up the damages inflicted by a group of attackers on the former building of Iran’s consulate in the city to show the depth of the friendship and brotherhood between the two nations.

U.S. Secretary of State Mike Pompeo on Friday lambasted his predecessor, John Kerry, for meetings with Iranian officials in back-channel talks and accused him of “actively undermining” the Trump administration’s policy toward Tehran.

Iran takes part in ‘One Belt, One Road’ security meeting

The fourth security meeting of member-states of ‘One Belt, One Road’ was held in the presence of Iran in Lianyungang, eastern China, on Wednesday and Thursday.

Iran’s Embassy in Paris has come under attack by alleged supporters of Iraq-based anti-Iran terrorists after the Islamic Revolution Guards Corps (IRGC) fired missiles at terrorist commanders in the Arab country’s Kurdistan region.

FM Zarif: Iran to mull over talks only if US returns to nuclear deal

Iranian Foreign Minister Zarif told Der Spiegel that it would be possible to think about holding talks with US only if the Western country returned to the Iran nuclear deal from which it withdrew back in May.

Dehghan: Terrorists in Idleb should be eliminated as they threaten the region

Adviser to Leader of the Islamic Revolution in the field of defense industries Brigadier General Hossein Dehghan stressed that terrorists in Idleb should be eliminated as they constitute a threat not only to Syria, but to the security of the region.

Erdogan blames US for ‘heinous economic attack’ on Ankara

Turkish President Recep Tayyip Erdogan has accused the United States of launching what he called a “heinous economic attack” on Turkey after the national currency lira hit a record low following US sanctions.

The Iraqi parliament elected the candidate of a pro-Iran list as speaker on Saturday, paving the way for the formation of a government more than four months after legislative polls. The country has been in political paralysis since the May 12 ballot, but the election of a speaker is expected to solidify new parliamentary alliances.

The first tripartite meeting of Iran, Afghanistan, and India was held on September 11, 2018 at the level of deputy foreign ministers in the Afghan capital of Kabul.

Not possible for US to bring Iran’s oil export down to zero: Ryabkov

Russian Deputy Foreign Minister Sergei Ryabkov said he believes it is not possible for the “unrealistic” US to bring down Iran’s oil export to zero, as Washington is almost isolated internationally on this particular issue.

US Secretary of State Mike Pompeo says Washington is studying issuing possible waivers for countries and businesses that want to continue buying oil from Iran beyond November 4, the White House’s designated deadline for them to halt oil imports from the Islamic Republic or face punishments.

Iran’s OPEC Governor Hossein Kazempour Ardebili said not much is left of OPEC’s international credibility as an organization thanks to the measures taken by such members as Saudi Arabia and the UAE against other founding members like Iran.

Turkey to continue Iran gas exports despite US sanctions

The anti-Israel art festival Hourglass was wrapped up in a recent ceremony in Tehran, awarding winners of the competition focused on annihilation of the Israeli regime.

Prominent Iranian TV and cinema dubber, Hossein Erfani, suffering from chronic cancer disease, passed away at a hospital in Tehran on Wednesday at the age of 76.

The Iranian grandmaster Parham Maghsoodloo made history and claimed the title of the FIDE World Junior Chess Championship 2018.

Iran picks “No Date, No Signature” as official submission to Oscars

The Iranian film “No Date, No Signature” directed by Vahid Jalilvand has been selected as the country’s official submission to the 91st Academy Awards in the best foreign language film category.

A new medical device used in joint surgeries has been developed by a group of Iranian researchers and unveiled in the Iranian city of Tabriz in East Azarbaijan province.