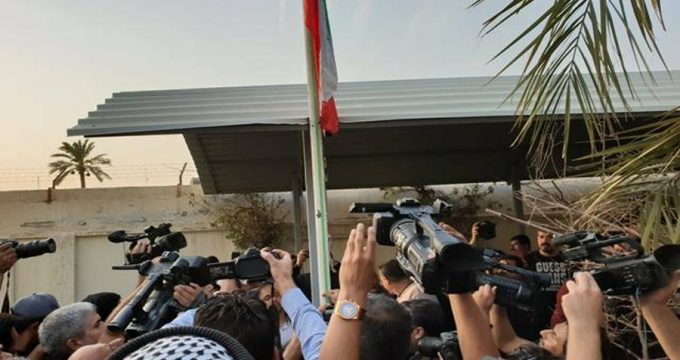 IRNA – The new Iranian consulate building in Basra was inaugurated with participation of Iran’s ambassador in Baghdad Iraj Masjedi, Iraqi local officials and a number of domestic and foreign reporters.

By hoisting the Iranian flag over the building, the Iranian ambassador officially opened the new diplomatic center in the southern Iraqi port city.

In his inaugural speech, Masjedi described the last Friday’s attack on the Iranian old consulate building as an attempt by the enemies of the two countries to mar Tehran-Baghdad relations.

He said such destructive measures by the two countries’ common enemies were unable to affect mutual ties.

Basra Governor Asaad al-Aidani said at the ceremony that the quick relocation of Iranian consulate was a proof of strong and deep relationship between the two countries.

The new round of protests which erupted in Basra over contaminated water and unemployment turned violent quickly leading to clashes between protestors and security forces. According to Iraqi health ministry, 11 people have been killed and over 100 others wounded in the clashes.

The organizers of the protests have announced that some elements affiliated to the Baath party and Daesh terrorist group had attacked and torched government buildings including Iranian consulate in the city.