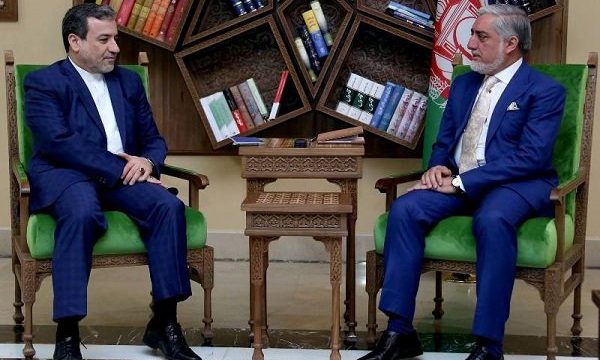 FNA – Iranian Deputy Foreign Minister for Political Affairs Seyed Abbas Araqchi emphasized the necessity for mutual cooperation with Afghanistan in the war on terrorism, noting that Tehran attaches much importance to stability and security of the neighboring states.

Araqchi made the remarks in a meeting with Chief Executive of the Islamic Republic of Afghanistan Abdullah Abdullah in Kabul on Tuesday.

“There is no good and bad terrorism,” he stressed during the meeting.

He underscored Iran’s concern about the activities of the ISIL terrorist group in Afghanistan, and said, “We consider Afghanistan’s security as our own security and therefore, we should have more cooperation in the fight against the ISIL.”

Abdullah, for his part, said that Iran and Afghanistan have had cooperation in the past to fight against terrorism but confrontation against common threats needs more cooperation.

He also downplayed influence of third countries in relations between the two countries, and said, “In its foreign policy, Afghanistan decides based on the principle of national sovereignty and its national security.”

Iran had in August announced that it certainly welcomed Afghan President Ashraf Ghani’s proposal for ceasefire and peace talks with the Taliban.

He expressed the hope that all groups and the government in Afghanistan would be able to use this proposal as an opportunity to reach ceasefire and calm conditions to pave the ground for talks and understanding for a better situation in the country.

“We will certainly support it,” Qassemi stressed.