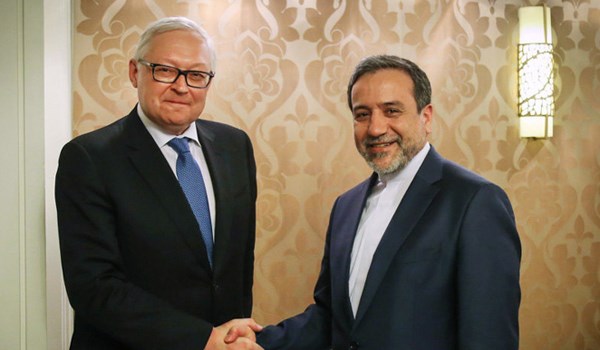 FNA – High-ranking Iranian and Russian officials in a meeting in Tehran on Monday discussed issues related to the 2015 nuclear deal and ways to keep the internationally-accepted agreement alive.

During the meeting, the two sides agreed to continue bilateral consultations in the future.

Russian Ambassador to Tehran Levan Jagarian confirmed Ryabkov’s visit to Tehran on Monday, and told FNA that his trip is aimed at talks with his Iranian counterpart.

Russian Foreign Ministry Spokeswoman Maria Zakharova had announced in August that Moscow would continue to honor its commitments under the landmark 2015 Iran nuclear deal reached with major world powers as long as other countries abide by their obligations.

“My country would deem any changes to the deal, officially known as the Joint Comprehensive Plan of Action (JCPOA), as destructive that could destabilize the already-volatile Middle East region,” Zakharova said.

She underlined that Washington’s course at bringing down the Joint Comprehensive Plan of Action on the Iranian nuclear program and restoring full-scale pressure through sanctions is absolutely unconstructive.

The sanctions reinstated on Iran on May 8 included boycott of Iran’s crude supplies and bans on transfer of its crude revenues. There is a 180 days interval before these sanctions come into effect. Other US secondary sanctions were reinstated last month.