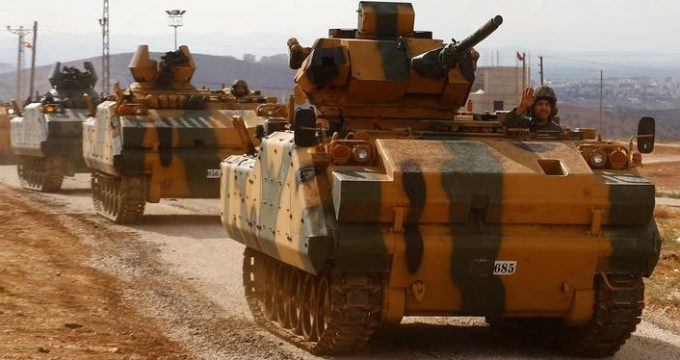 Alwaght – Turkey reportedly has sent a massive military convoy into Syria’s Idlib province as Damascus forces are preparing to launch a large-scale operation to liberate the northern province from foreign-backed militants.

According to the Lebanon-based news portal, the Turkish military convoy entered Syria through the Kafr Losen Crossing and was heading towards the militants front-lines in the Idlib and Hama provinces.

A convoy of military hardware and equipment has been sent to Kelis region in Southern Turkey, the semi-official news agency reported adding the convoy comprised tanks, armored vehicles and other military equipment that arrived in al-Bili city near the border with Syria.

In a relevant development last Wednesday, the Turkish Army has dispatched more convoys of troops and military equipment to the borders with Syria as Damascus troops are standing orders to start a Idlib liberation operation, a Turkish media reported.

The Turkish media reported that Ankara has dispatched a long convoy of advanced tanks and a large number of military trucks to the Kelis region in Southern Turkey near the border with Syria.

They said that the Turkish army’s military convoy comprising 25 military and armored vehicles is now in al-Bayli city along the Turkey-Syria border.

The Turkish army also dispatched a military convoy carrying fortified concrete walls and military equipment to the areas under the control of the Turkish army in Morek city in Northern Hama.

Idlib, located in the northwestern border with Turkey, was seized in May 2015 by an alliance of armed groups led by Jaysh al-Fatah, the Syrian affiliate of Al-Qaeda terrorist group. The battleground equations changes have opened the hands of the Syrian Arab Army to prepare for a huge offensive against the terrorists’ last safe haven.

According to the latest reports surrounding the upcoming operation, the Syrian Arab Army has been deployed to several points, including southwestern Aleppo, eastern Idlib, northeastern Lattakia, and northwestern Hama ready to launch its offensive against a wide range of the terror factions holding the province for over three years.

One part of Idlib is controlled by Ahrar al-Sham, loyal to Turkey and Qatar, while the other two are ruled by two various factions of Tahrir al-Sham alliance. To be more specific, Maarrat al-Nu’man, Ariha, Jabal Shahshabaw, Al-Habit, Banesh, Gorgnaz, Taftanaz, and the nearby villages are held by Ahrar al-Sham. Khan Sheikhun, part of Jabal al-Zawiyah, Kafr Nabl, Salgheen, Harem, Darkush, Jisr al-Sheghour, Sarmada, Idlib city, Sarmeen, and Maarrat Masreen are under Tahrir al-Sham’s control. Small areas of the province, mainly in the south, are also held by ISIS terrorist organization

In the meantime, Turkey has stepped up its diplomatic and military movement to prevent the Syrian government from starting the game-changing campaign.

The Turkish officials since mid-August launched a largely unsuccessful campaign of whitewashing the terrorist factions. Aiming to change the ground realities, they took pains to introduce the terrorists as moderate opposition, mainly affiliated with the Free Syrian Army which is widely recognized as the military wing of the opposition. The final aim is to strip the central government of legitimacy of the operation as an anti-terror one. According to reports, commanders of the Turkish army in northern Syrian met with Tahrir al-Sham and Turkistan Islamic Party and other terrorist parties on August 25 discussing a Ankara-proposed initiative to dissolve the groups and incorporate them in what Turkey calls moderate opposition such as Ahrar al-Sham with affiliation to the Muslim Brotherhood, an Islamist movement with roots across West Asia and under Turkey and Qatar patronage.

Indeed, Ankara leaders seek to Persuade Tahrir al-Sham, an extremist organization which was excluded from Russia-Turkey-brokered “de-escalation zones”, to disband in order to prevent the army from operation under the ruse of the possibility of a humanitarian crisis. But to Ankara’s frustration, the Idlib field realities are unchangeable. In fact, even if the militias agree to disband, Damascus will not lose an international legitimacy to spread the rule of law across the country’s territories.

Ankara leaders are in a hard struggle to rebrand the terrorist groups in the contested province. But their choices are never various and pleasant. President Recep Tayyip Erdogan of Turkey has the difficult job of picking the best possible choice. The first option, which can be the worst and heavily costly for him, is fully supporting the terrorists, including a military intervention to prevent the Syrian army from advancing for a final cleansing of the region from the militiamen. Such a move can have three consequences: Ankara will be ejected from the Sochi and Astana peace initiatives. It will certainly decline to foil the operation as Damascus has the Russian and Iranian cover. And the final one is that Turkey could lose its foothold for swaying the Syria future equations.