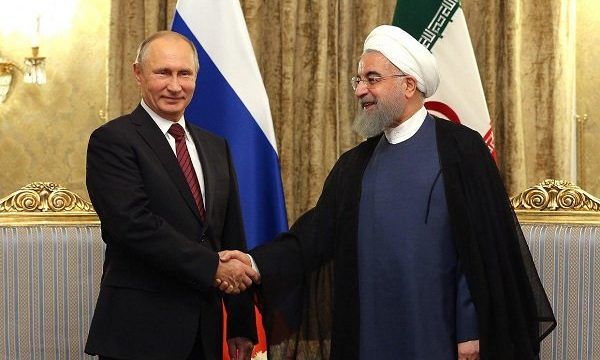 MNA – Meeting with his Russian counterpart Vladimir Putin on the sidelines of Tehran summit on Syria settlement, President Rouhani said the level of trust between the two sides for cementing bilateral, regional, and intl. ties is “unprecedented”.

Presidents of the Islamic Republic of Iran and the Russian Federation met on the sidelines of the Tehran Tripartite Summit on Syria settlement and emphasized development and deepening of bilateral, regional and international relations between Tehran and Moscow.

During the meeting on Friday evening, President Rouhani expressed satisfaction with the successful holding of the Tehran Summit within the format of the Astana Peace Process, adding “the effects of the Syrian crisis are unfortunate for all, but Iran-Russia cooperation with the Syrian people, army and government is important in the fight against terrorism.” Rouhani added that the tripartite talks between Iran, Russia and Turkey could serve as a good model to resolve other regional problems.

He went on to add, “Iran-Russia cooperation in the fight against terrorism and the defeat of the largest and most dangerous terrorist group was not only in the interest of the Syrian people but also in favour of all nations throughout the world.”

Praising the role of Russia in striking the nuclear deal and its perseverance, as well as the parties’ commitment to its implementation, President Rouhani said voiced hope for firm and effective support to the agreement by all parties despite the US unlawful and unilateral withdrawal.

He then highlighted the signifiance of developing banking and brokerage relations between Iran and Russia as an important factor in deepening bilateral trade and economic cooperation.

The Iranian president further emphasized the efforts of the two countries’ officials to accelerate the implementation of the agreements and to develop cooperation in various sectors, including energy, joint investment in the construction of power plants and railways, and infrastructure projects, and cooperation in the economic, scientific and technological fields.

The Russian President, for his part, stressed the importance of developing economic relations with Iran, adding “Russia is ready to cooperate with the Iranian side in the construction of the North-South Corridor project.” He then referred to the existing potentials for development of cooperation between Iran and Russia in various commercial, economic, agricultural, energy, nuclear and infrastructure sectors.

Vladimir Putin then emphasized the need to preserve the Iran nuclear deal dubbed the Joint Comprehensive Plan of Action (JCPOA), as well as the compliance of the parties to their commitments, adding “Russia is seeking consultations with the parties to the JCPOA to find ways to maintain and develop economic relations with Iran within the framework of the nuclear deal, and will continue these talks on the sidelines of the United Nations General Assembly.”

“Russian companies will not give up on investment in Iranian projects under any circumastances,” President Putin stressed, while noting the necessity of doing business with the use of national currency.

Putin further referred to the positive role of Iran and Russia in resolving the Syrian crisis, saying “gradually, with the elimination of terrorist threats in Syria, the issue of political settlement of the crisis will be put on the agenda.”