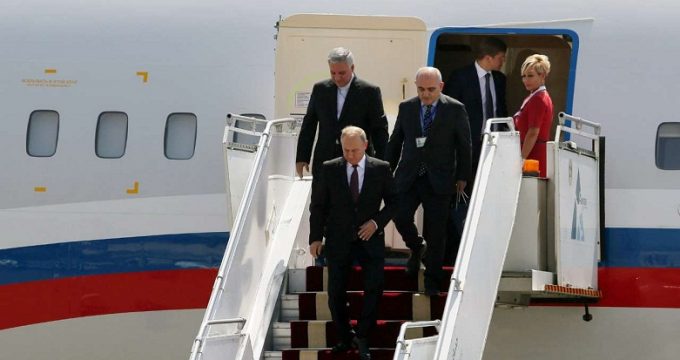 The three presidents were due to meet Friday as part of their efforts to return peace and stability to Syria which is gearing up for a decisive battle to expel terrorists from their last major urban stronghold.

Ankara, Moscow and Tehran are guarantors of the Astana process, a track of negotiations which have resulted in the return of a succession of militant bastions to the government fold and movement of civilians to safe zones.

Ahead of his visit to Tehran, Erdogan said Turkey aims to find a “permanent solution” to the conflict in its southern neighbor through the discussions.

Ankara is worried that an operation in Idlib could lead to a wave of refugees pouring across the border into Turkey. The Friday meeting aims to find a mutually acceptable formula to avoid such consequences.

Turkey agreed with Russia and Iran last year to make Idlib a “de-escalation zone” of reduced conflict. Syria and Russia say the province has now become a “nest of terrorists” which has to be dismantled by force.

Idlib’s dominant rebel faction is Tahrir al-Sham, an alliance spearheaded by al-Qaeda’s former affiliate in Syria, the Nusra Front, though other groups are also present.

The Syrian government has offered “reconciliation” for the negotiated militant surrenders that have taken place in some areas.

Deputy Foreign Minister Sergei Ryabkov said Russia is looking to the Tehran summit as a means of clarifying the military situation in Idlib. The fate of the Nusra Front and other foreign Takfiri terrorists will be one of the top issues at the summit.

Russian officials have also stated clearly that militants must be pushed out of Idlib. They are using civilians as human shields and planning a possible false flag chemical attack, Syrian and Russian officials say.

The so-called Syrian Observatory for Human Rights said on Friday airstrikes hit parts of Idlib province on Friday morning, possibly paving the way for a ground operation by the Syrian army.

The meeting in Tehran marks the third time the presidents of Turkey, Russia and Iran have met over Syria in less than a year. Their previous meetings in the Russian resort city of Sochi and the Turkish capital, Ankara established de-escalation zones in several areas, including Idlib.

The presidents were also to hold bilateral talks on the sidelines of the summit, while their foreign ministers planned to hold talks separately ahead of the tripartite summit.

A final statement was expected to be released following a joint press conference by the three presidents.

The official reiterated Iran’s determination in fighting terrorism, saying the trilateral talks would continue to help end the conflict in the Arab country.

The summit is being held at a time when “unilateral US policies” and sanctions have targeted the three countries, Jaberi Ansari added.