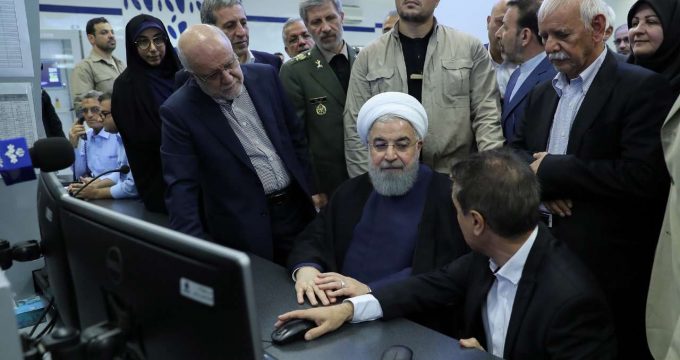 MNA – Inaugurating three major petrochemical projects in Asaluyeh petrochemical zone in southwestern Iran was the headline of almost all Iranian energy related and economic news agencies across the country on Monday.

These petchem projects were officially inaugurated by President Hassan Rouhani which signifies their importance for Iran’s economy in the new era of sanctions and economic pressure imposed by the US.

Since, as stated by President Rouhani in the inauguration ceremony, petrochemical industry is one of the most important pillars of the country’s resilient economy and “one of the main suppliers of foreign currency especially euro for the country”.

“The country is currently producing 62 million tons of petrochemical products annually and with the new projects going on stream the number will jump to 65.5 million tons further cementing the Islamic country’s stance as a major petrochemical supplier to the world markets” Zanganeh said at the opening ceremony in Bushehr Province.

At the top of the world

The third phase of developing Pardis Petrochemical Company was one of the inaugurated projects which was implemented at the cost of €502 million secured from the income of the first and second phases of the company.

This phase will make Pardis the largest producer of urea and ammonia in the Middle East and world with an annual production capacity of 5.265 million.

Iran is currently exporting urea to Turkey, India, China, Europe and many countries in Latin America. The country exported over 4 million tons of urea in 2017.

Marjan Petrochemical Complex, a producer of methanol, with the annual capacity of 1.65 million tons was another project which officially started operating on Monday. Construction of this complex was started some six years ago and $914 million has been invested for this project.

Iran is planning to have the world’s largest methanol production capacity in the upcoming years. With 11 other methanol complexes underway, the country’s methanol capacity is due to increase to 19.1 million tons.

The first phase of Damavand Petrochemical Company’s power plant with the capacity of 1,900 MW and at the cost of $366 million was the third project inaugurated by the president.

This phase of the power plant is going to supply electricity and steam to 24 petrochemical complexes located in Phase 2 of the Assaluyeh petrochemical zone.

The power plant includes two main boilers and an auxiliary thermal recovery boiler and has the capacity to produce 780 tons of steam per hour, providing the required steam for Petrochemical Complexes of Mehr, Morvarid, Kavian and Marjan.

The contracts which cover the upgrading and modernization of the South Pars flare gas recovery utilities, include 32 projects estimated to cost a total of $1.2 billion.

Aiming to prevent the daily burning of around 22 million cubic meters of gas (760 million cubic feet), these projects are scheduled to be implemented in the next 2.5 years.

The port city of Asaluyeh is home to a number of petrochemical complexes which receive gas and gas condensate feedstock from the giant South Pars gas field, which Iran shares with Qatar in the Persian Gulf.