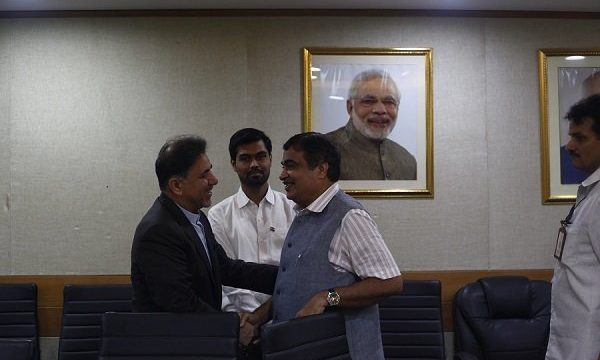 MNA – Road ministers of Iran and India met on Thursday in New Delhi where both sides highlighted the need to promote bilateral cooperation in transportation domain.

In a meeting between Iranian Minister of Roads and Urban Development Abbas Akhoundi and Indian Minister for Road Transport and Highways Nitin Gadkari, officials of both countries conferred on various issues including ways to enhance bilateral ties.

Implementing previous agreements on development of Chabahar Port and facilitating financial transactions between the two countries via using rial and rupee currencies were among other main topics of discussion.

Gadkari said that both countries have a great position to connect to other commercial and consumer areas of the world, adding that India is an important pole in East Asia and an important economy in South Asia, and through Iran it can easily connect to Central Asia, Russia and Europe.

The location of the Chabahar port is very strategic and can connect India to Afghanistan, he highlighted.

The Iranian minister arrived in New Delhi on Thursday to take part in India’s First Global Mobility Summit ‘MOVE’ which is dedicated to promotion of electric vehicles and shared mobility. Akhoundi will discuss ways to boost strategic cooperation in the domain of transportation and hand the official invitation of President Rouhani to Indian Prime Minister Narendra Modi for the 3rd Asian Cooperation Dialogue (ACD) summit which is going to be held in Iran.

Akhoundi is accompanied by officials from the international affairs department of the Ministry of Roads and Urban Development, Islamic Republic of Iran Railways, and Ports and Maritime Organization of Iran.