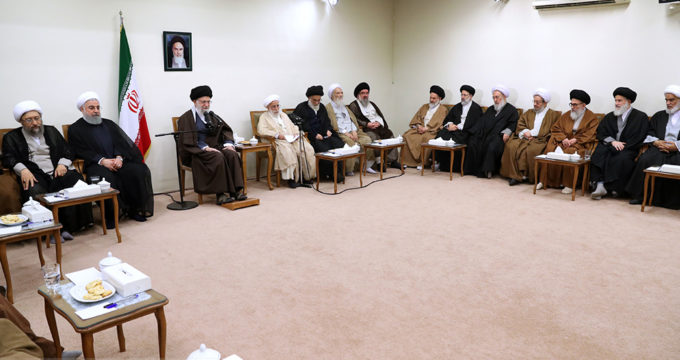 Leader of the Islamic Revolution Ayatollah Seyyed Ali Khamenei says enemies of Iran have unleashed an all-out economic and media war against Iran with the aim of creating “despair” and “pessimism” among people.

Iran’s Ambassador to the United Nations Gholam Ali Khoshroo decried the growing resort to unilateralism by “a certain power” as a major threat to world peace and security.

Members of the Assembly of Experts met and held talks with Leader of Islamic Revolution Ayatollah Khamenei on Thursday.

Trump not concerned with meeting Rouhani, says Iran in ‘turmoil’

U.S. President Donald Trump said on Wednesday he remained open to the possibility of talks between Washington and Tehran, but said Iran was in turmoil and struggling to survive.

A senior Iranian nuclear energy official says Tehran is ready to enrich uranium beyond previous levels in case the remaining parties to the country’s 2015 nuclear agreement fail to salvage it.

Iran: US abusing UNSC to divert attention from Israeli violations of intl. law

Iran has censured US President Donald Trump’s latest decision to chair a United Nations Security Council (UNSC) meeting against the Islamic Republic, saying such a meeting is meant to divert the world’s attention from American and Israeli violations of international law and the very same Council’s resolutions.

Speaker of Iran’s Majlis (parliament) Ali Larijani has said he hopes that the final decision on the situation in Syria’s Idlib will be made at the summit in Tehran on September 7.