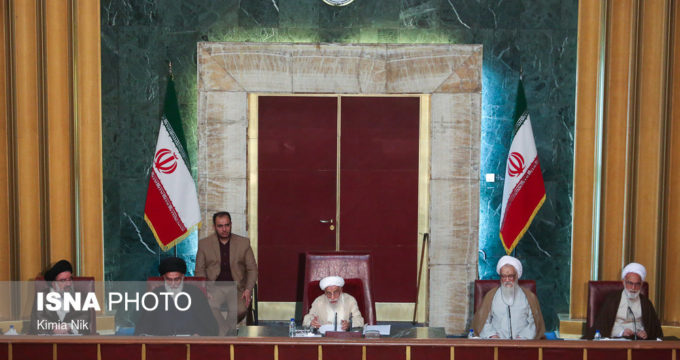 Tasnim – Chairman of Iran’s Assembly of Experts described the US withdrawal from the 2015 Iran nuclear deal as yet another strong evidence that the US is untrustworthy, rejecting any negotiation with Washington.

Addressing a periodic session of the Assembly of Experts in Tehran on Tuesday, Ayatollah Ahmad Jannati said, “We must learn lessons from the experience of the JCPOA and keep in mind that the US is unreliable.”

He also stressed that such mistrust of the US must be preserved during any possible negotiations in future.

While Iran has honored all of its commitments to the Joint Comprehensive Plan of Action (JCPOA), the US withdrew from the agreement, Ayatollah Jannati deplored, adding that the EU is also pursuing the US demands and has brazenly called for talks on Iran’s missile program.

Referring to the outright ban that Leader of the Islamic Revolution Ayatollah Seyed Ali Khamenei has put on bilateral talks with the US, the cleric said, “Trump has raised the idea of negotiations without preconditions as another fraud. There are also attempts inside (Iran) for a possible meeting between the president (of Iran) and Trump on the sidelines of the United Nations General Assembly.”

The 88-member Assembly of Experts opened the fifth session of its current term in the former building of the Iranian Parliament in downtown Tehran on Tuesday morning.

In comments last month, Ayatollah Khamenei roundly dismissed the idea of negotiations with the US, saying dialogue with a bullying regime that uses talks as a tool for pursuing its hostile policies is forbidden and would be detrimental to Iran.

On May 8, US President Donald Trump pulled his country out of the JCPOA, which was achieved in 2015 after years of negotiations among Iran and the Group 5+1 (Russia, China, the US, Britain, France and Germany) and re-imposed the US sanctions against Iran.