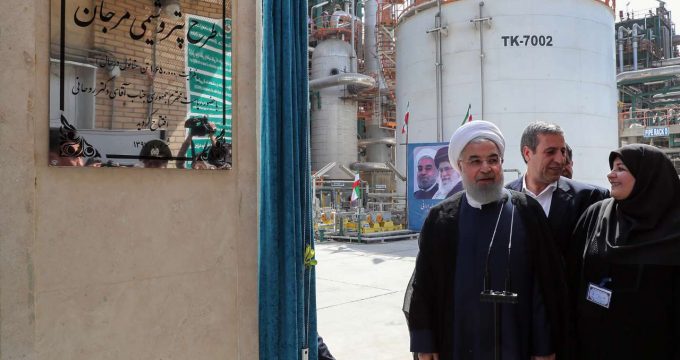 A third project to generate 648 megawatts of power also became operational. Phase one of Damavand Petrochemical Utility Plant will provide electricity to 12 petrochemical facilities on top of 780 metric tons of steam, Shana said.

The 12-turbine Damavand plant is being developed in three phases with the ultimate capacity to generate 1,900 MW of power plus industrial water, oxygen, steam and wastewater treatment for petrochemical units.

Pardis Petrochemical Plant got its third urea and ammonia unit up and running, making the 5.26 million mt/y facility the biggest producer of the molecules in the world, according to Shana.

“It is always pleasing to us to see a production unit start operating in the country, but having three projects inaugurated and operational in one day when our enemies are pursuing tyrannical sanctions against Iran means the victory of the country against the enemy’s plans,” Rouhani said.

The minister said 15 percent of the sum used in the projects had come from direct investment and the rest in the form of foreign financing.

The resistive economy is Iran’s blueprint to counter sanctions through increasing the country’s resilience to subversive policies of adversaries.

Iran is facing new US sanctions which senior officials see as tantamount to an all-out “economic war”.

The first wave of sanctions targeting Iran’s financial, automotive, aviation and metals sectors came into force in August, with the second wave due to kick in two months from now and hit the country’s exports of oil and its derivatives.

Washington is trying to stop Iran’s petrochemical, steel and copper exports, and to disrupt its ports and shipping services.

Iranian officials are clear-headed about the impact of the US sanctions, but they have stressed that the measures will not curb the country’s development plans.

Rouhani said Iran is facing a “psychological and economic war in which oil, gas and petrochemical industries are at the forefront of confronting the ill-wishers.”

President Rouhani and other senior officials attend a ceremony to inaugurate new petrochemical projects in the Persian Gulf port of Assaluyeh, Iran on Sep. 4, 2018. (Photo by Tasnim)

Rouhani called Iran’s oil, gas and petrochemical resources as a “great blessing of God” which have to be treasured by turning them to more valuable products.

In the petrochemical sector, Iran is seeking to build 25 projects which are estimated to require $32 billion in foreign investment. The projects range from ammonia and urea to gas-to-olefins (GTO) and gas-to-propylene (GTP) plants.

Rouhani said Iran has to attract domestic and foreign investment, although it may be hard to come by.

Nevertheless, “we will overcome the problems, and this is due to the fact that many years of efforts by our experts have borne fruit in Assaluyeh,” he said.

“Some of these projects that were launched today had started during the sanctions times and launched while the enemy is thinking new sanctions,” Rouhani said referring to the US sanctions before Iran’s nuclear deal became effective in January 2016.

The country is already a major methanol producer. According to digital media company GlobalData, Iran has the highest planned methanol capacity additions globally.

Norouzzadeh said two other methanol plants, Bushehr and Kaveh, are in final construction phase and will be launched before the current Iranian year ends on March 20.

Iran is expected to add 30 million metric tons per year to its capacity from 2018 to 2022, accounting for 54 percent of the total global planned methanol capacity additions.

It is not clear yet whether the reintroduction of US sanctions could delay implementation of Iran’s ambitious projects, including more than 4 million mt/year of methanol capacity which the country plans to bring online in 2018.

“They impose problems on people, but it is impossible to dominate Iran and Iranians, and their dream to return us to before 1979 will not be realized,” the president said, referring to the time when Iran’s Shah was a close ally of the US.

Iran’s methanol customers and US threat

The US has special interest in trying to curb Iran’s methanol exports. The country is due to more than triple its capacities from 2015 to 7.5 million mt/y by end of 2018, shifting from importer to exporter, with Europe and Asia within its sights.

With its major methanol-to-olefins capacities, China is the biggest importer of Iranian methanol. According to China Customs, the country took in 2.5 million metric tons of molecules from Iran in 2017.

Iranian methanol shipments also go to Europe which has pledged to maintain trade with the Islamic Republic, with Italy accounting for the bulk of imports in the past few years.

Major European powers have reactivated a law which is purported to protect businesses against US sanctions on Iran. However, a number of European firms have been winding down business with Iran for fear of facing US retributions.

European buyers lifted about 130,000 metric tons of Iranian methanol in 2017, with a monthly average of around 11,000 mt, according to data from statistical agency Eurostat.