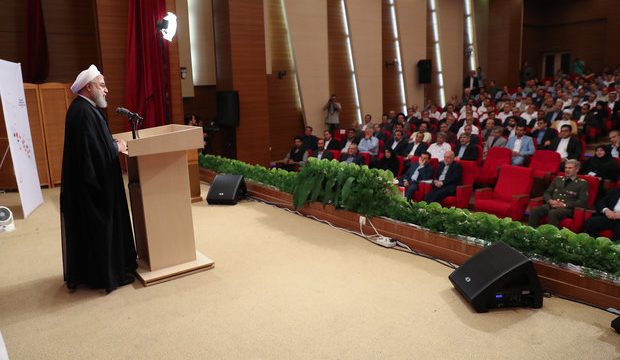 MNA – Iranian President Hassan Rouhani said Tue. that the country’s oil, gas and petrochemicals are at the forefront of countering the enemies’ economic sanctions against Iran.

Speaking at the inaugration ceremony for the three projects, President Rouhani said some of the projects inaugurated today had been started during the sanctions era before the signing of the nuclear deal, and “a number of other projects were signed today to be implemented now that the enemy seeks to impose new sanctions,” following the US’ unilateral withdrawal from the agreement.

“They want to return us to 40 years ago so that we yield and admit we were wrong to have wanted to be independent,” Rouhani said. “[They want us to] regret that we threw them out of Iran, that we now want to be an influential actor in the region.”

“Such a dream will never be realized and we will overcome the problems,” reassured Rouhani.

“The fact that three major projects are inaugurated in one day, especially now that hostile countries are exerting pressure against our nation and imposing unlawful and cruel sanctions, it means our victory against the enemies’ plots,” he stressed.

The president noted that 14 petrochemical projects have been inaugurated since 2013, and six more projects will be inaugurated next year.