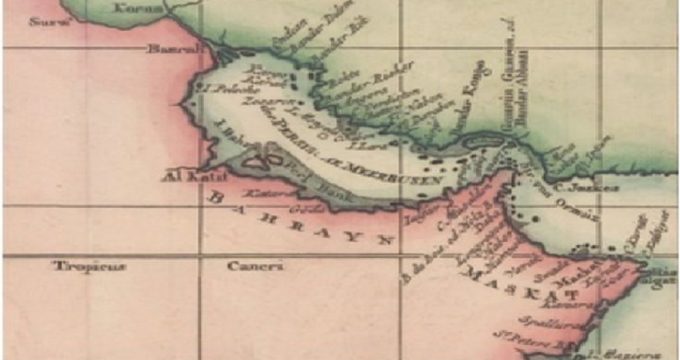 The map was revealed when Dhahi Khalfan published an evidence on his twitter account to support his claim that Qatar belonged to Bahrain in the past.

‘I consider Qatar as an inseparable part of Bahrain,’ wrote Dhahi Khalfan in his Twitter message on Sunday.

He demanded that the country should be returned to Bahrain.

The map published by Khalfan dates back to 1745 and contains the name ‘Persian Gulf’, from which Khalfan has most probably been ignorant of.

The oldest map showing the name ‘Persian Gulf’ dates back to 500 BC; however, the name ‘Bahr al-Fars’ meaning ‘the Sea of Persia’ has been repeatedly used in Arabic historical and geographical texts.

Disregarding all the historical facts, some Arab countries tried to fake the name A-r-a-b-i-a-n Gulf with the expansion of pan-Arab ideas by Egyptian Former President Gamal Abdel Nasser in the 1960s.

The claim that Bahrain owns Qatar is an issue that has fanned the flames of the verbal war between the two Persian Gulf littoral countries in the past few weeks.

King Hamad bin Isa Al Khalifa of Bahrain has claimed in a meeting in the presence of some of his countries’ tribes that Bahrain’s sovereignty over Qatar has been proved since 1762.

He has said that the Qatari tribes gave Zubarah to Bahrain in 1762, and hence the ownership of all the peninsula of Qatar with Zubarah as the capital was transferred to Bahrain.

Many people reacted to the claim in the social media and said that it would cause a new crisis between the two countries.

Arab countries of the Persian Gulf have always had border problems, but claim of sovereignty over all of Qatar is a new one heard from Hamad bin Isa Al Khalifa, the King of Bahrain.

He believes that Zubarah belongs to Bahrain and that equals all Qatar.

In March, in an interview with Egyptian newspaper al-Ahram, he said, ‘We know the people of Qatar. They are our family; before the sovereignty of Al Thani, they were our people.’

The two countries have a dispute over Zubarah, Janan Island, Fasht Dibal Island. Bahraini foreign minister said in July that his country is ready to take the three islands.

Saudi Arabia, the United Arab Emirates, and Bahrain accused Qatar of supporting terrorism and broke off all their ties with the country and closed their air, sea and land borders with it.

The sanctioners issue 13 demands to end the crisis.

Replying that the sanctioning states never gave a proof for their claims, Qatar said that implementing the conditions is violation of Qatari sovereignty.