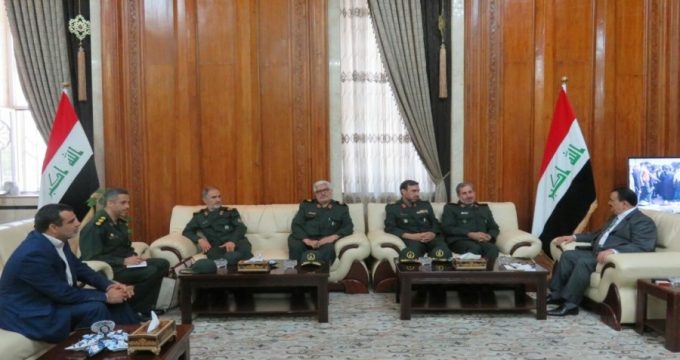 IRNA – Deputy chief of staff of the Armed Forces of the Islamic Republic of Iran Brigadier General Qadir Nezamipour conferred on Sunday with Iraqi Defense Minister Irfan Mahmoud Al-Hayali on expansion of defense cooperation between the two neighbors.

During the meeting, the two sides called for expansion and deepening of mutual cooperation.

They examined quadrilateral security dialogue between Iran, Russia, Iraq and Syria and also exchanged views on Arba’een religious ceremony (The Day of Arbaeen marks forty days after the Day of Ashura, the day Hussain ibn Ali was martyred in the Battle of Karbala ) which is to be held in Iraq.

The Iraqi Defense Minister also thanked the Islamic Republic of Iran for its cooperation in fight against Daesh terrorist group, adding that the two neighboring countries enjoy a high level of relation and cooperation.