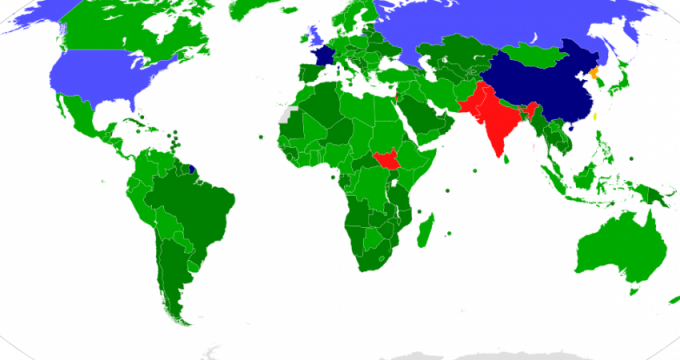 Should Iran leave the NPT?

Iranian Diplomacy | Kaveh L. Afrasiabi: Should Iran leave the Nuclear Nonproliferation Treaty (NPT)? This is an important question that has gained traction in Iran as a result of US’s unilateral exit from the nuclear accord, re-imposition of sanctions in direct violation of the UN Security Council Resolution 2231, and failure of the other parties to the deal to seek US’s condemnation at the Council. Four months after Trump’s announcement of US’s withdrawal from the deal, the European governments have yet to offer a concrete package to preserve it, limiting themselves to the symbolic gesture of a token assistance, which is hyped in terms of assistance to “Iran’s sustainable development,” i.e., a farcical representation, and they have ignored Iran’s foreign minister’s call on them to provide guarantees for energy and financial matters, as called for by the JCPOA (Joint Comprehensive Plan of Action).

Clearly, Iran’s patience is running thin, in light of the country’s “suffering” in the form of tens of billions of dollars of foreign investment lost due to US’s illegal sanctions, per the statement of Iran’s representatives at the International Court of Justice, which is deliberating on Iran’s legitimate complaint against the US, as well as the warning by Iran’s Supreme Leader that Iran is ready to abandon the JCPOA.

Assuming that Europe fails to meet Iran’s demands and continues with its deliberate delay of action and its current attempt to enjoy the benefits of the JCPOA on the cheap, without incurring any costs, then it is a safe bet the JCPOA is finished and destined to history’s dustbin. There is absolutely no scenario wherein Iran would continue implementing the onerous obligations of the JCPOA while the other parties have either left the agreement or failed to meet their respective obligations. The JCPOA clearly calls for the normalization of Iran’s foreign trade and the removal of energy, financial, and other barriers to Iran trade and the egregious, total disregard for these important provisions of the agreement shown by the Western governments in effect sounds the death knell for the agreement, heard louder and louder. In other words, the window of opportunity to save the JCPOA is closing and the ball is entirely in the laps of the Western governments to save it or watch it die due to their transgressions of a legally-binding international agreement.

Should Iran act on its repeated warning and leave the JCPOA, then the immediate implication would be the termination of all the extensive nuclear restrictions on Iran’s nuclear program, the end of intrusive IAEA inspections, and Iran’s unfettered resumption of full-scale nuclear activities. A big question is, however, if Iran should maintain its obligations under the normal protocol with the IAEA and, furthermore, whether or not it should exit the NPT altogether?

Indeed, this is an important question that should be decided by carefully examining the pros and cons of staying in a nuclear arrangement that yields little or no benefit to Iran, which has faithfully complied with the JCPOA and all its related IAEA obligations, only to receive the big slap of new sanctions and a European failure to take meaningful action to save the deal. If this situation persists, it would only mean that Iran is asked to submit to the full range of nuclear restrictions while being punished by punitive sanctions instead of being rewarded. Only by resorting to a perverse neo-colonial or Orientalist mind-set, to invoke a term from the late Edward Said, can the Western governments have this kind of expectation from Iran.

Once Iran leaves the IAEA and the NPT, then it is no longer obligated to provide any information about its nuclear program. Depriving the West of this information and throwing a cover of darkness on Iran’s civilian nuclear program will no doubt trigger a tsunami of fear and concerns on their part. By turning off the IAEA surveillance cameras, kicking out the inspectors, and simply ignoring the European and Americans’ sound and fury, Iran will demonstrate its resolve to hit back at the hypocritical Western governments and their lack of appreciation for Iran’s critical cooperation for years without receiving any reciprocal benefit. This new hardline Iranian approach is dictated by Iran’s national interests and those who question it are simply ignorant of the policy demands of Iran’s national security, in light of the blatant illegal demands from Iran by the US today and the total disregard for the rule of law on the part of the American president.