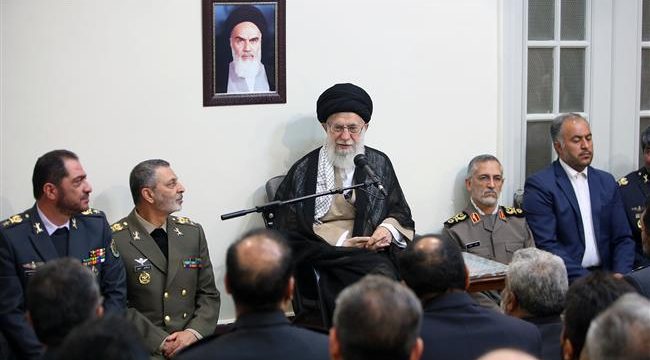 Press TV – Leader of the Islamic Revolution Ayatollah Seyyed Ali Khamenei says there is no possibility of a military war on Iran given the ongoing political considerations, but the country’s Armed Forces must continue to upgrade their human and military hardware capabilities.

Ayatollah Khamenei made the remarks in a meeting with commanders and officials of Iranian Army’s Air Defense Base in Tehran on Sunday.

“The Armed Forces must upgrade their human and military hardware capabilities on a daily basis through vigilance as well as efficient and dynamic management,” Ayatollah Khamenei stated.

The Leader added that every step that is taken to boost the preparedness of Iran’s Armed Forces amounts to an act of worship before the Almighty God.

Stressing the importance of increasing preparedness and capabilities of the Air Defense Base and its staff, Ayatollah Khamenei emphasized that the Army’s Air Defense Base is a very sensitive part of the Armed Forces, which is on the frontline of the confrontation with Iran’s enemies.

During the meeting, the new commander of Iranian Army’s Khatam al-Anbiya Air Defense Base, Brigadier General Alireza Sabahifard, presented a report on the base’s measures and future plans.