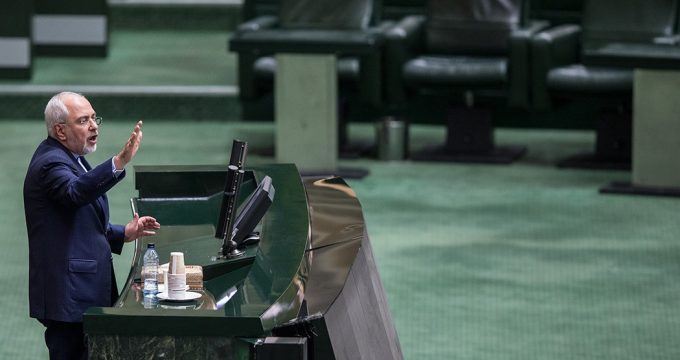 Iran use all available tools to advance goals: FM

IRNA – The Islamic Republic of Iran, similar to other countries, use all available tools to promote its goals on the international scene, said Iran Foreign Minister Mohammad Javad Zarif on Sunday.

The Iranian top diplomat, appearing before the lawmakers in Iran’s Majlis (Parliament), said that the country’s nuclear negotiators were also obliged to use all at their disposal during talks.

Zarif, referring to Iran’s lawsuit against the United States at the International Court of Justice, said that British and French lawyers were employed by Iran while a British lawyer were present on part of the US.

‘Nobody questions employing lawyers who hold other citizenships, despite the fact that they are engaged in private negotiations and discussions,’ he said, adding that it is an international custom and tradition.

Meantime, touching on some arguments about the failure of the nuclear talks between Iran and the major world powers, he said that the 2015 nuclear accord, formally known as the Joint Comprehensive Plan of Action (JCPOA), demonstrated the legitimacy of the Islamic Republic of Iran.

‘Today it is the United States that is defeated and unable to use the JCPOA solely to its own benefits,’ he stressed.

‘Despite all the claims and predictions by those against the international agreement, it was the US that pulled out from the deal,’ Zarif said.