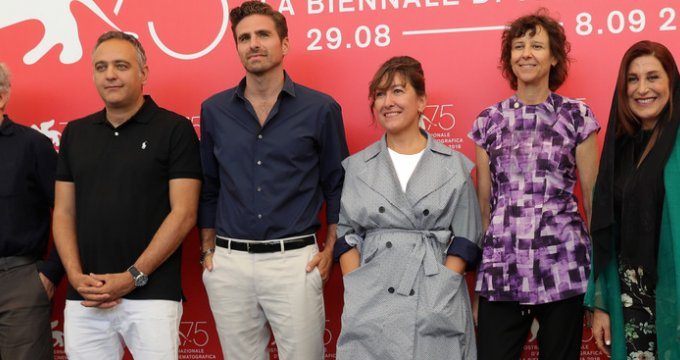 Financial Tribune – The 75th Venice Film Festival opened on August 29 with the world premiere of Damien Chazelle’s First Man, starring Ryan Gosling as American astronaut Neil Armstrong. Among the participants in the opening ceremony was Iranian actress Fatemeh Motamed-Aria who is a member of the jury in the Orizzonti (Horizon) section.

Motamed-Aria, 56, is a multi-award-winning Iranian actress. She also is involved in humanitarian work and helps raise funds for charities.

Iran is present in this section with one feature and one short film.

Competing with 18 feature films from across the world, “As I Lay Dying,” directed by Mostafa Sayari is the Iranian representative in the competition.

Loosely based on a namesake poem by Irish writer William Faulkner, it tells the story of three brothers and one sister who seek to fulfill the last will of their deceased father.

Vying for a prize with 11 other short films, “Staircase” written and directed by Mohsen Banihashemi is about the confrontation of two women who are in a situation which forces them to show their true emotions and intentions.

Sara Bahrami, Toomaj Danesh-Behzadi, Faezeh Yousefi and Camelia Ghazali are in the cast.

Build up to the festival this year has been dominated by talk about the lack of female filmmakers represented in the program, with only one film directed by a woman, Jennifer Kent’s The Babadook follow-up The Nightingale.

The festival ends on September 8.