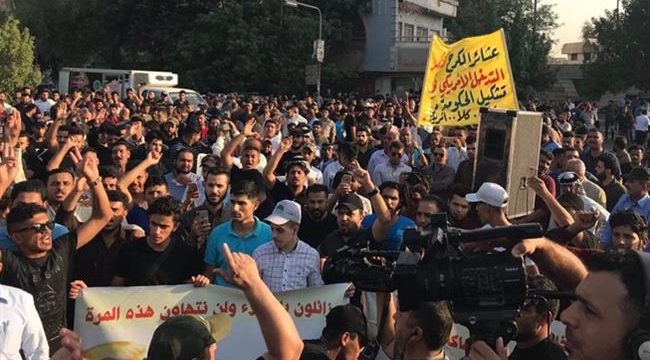 Press TV – Hundreds of Iraqis have taken to the streets of the capital, Baghdad, to vent their anger at the US meddling in the Arab country’s domestic affairs.

Demonstrators gathered in central Baghdad on Friday carrying banners and chanting slogans in condemnation of Washington’s interference in Iraq’s internal issues amid political uncertainty over the makeup of a new government.

Protester Sheikh Kazem Faihan called on the Iraqi nation to be united against “the enemy and its stark intervention in our matter. It’s a Zionist US enemy trying to intervene in our local matter so, oh, Iraqi people how can you be silent about this criminal act?”

Sadek Mahdawi, another participant in Friday’s rally, stressed that the Iraqi people have to choose their own government.

“Our demand is [for them] not to interfere in Iraqi matters, this is first. Second, we are electing a counsel to be in charge of forming a new council with no foreign intervention from the US or anyone else,” he said.

“They (the Americans) are not the world’s only power. We are people with a deep rooted civilization and our history was formed before US history even started. We invented the real civilization and the first handwriting and we’re supposed to be able to elect our own government.”

The US, backed by the UK, invaded Iraq in 2003 under the pretext that the then regime possessed weapons of mass destruction. No such weapons, however, were ever found in the country.

More than one million Iraqis were killed as a result of the US-led invasion and the subsequent occupation of the country, according to the California-based investigative organization Project Censored.

The invasion plunged Iraq into chaos and led to the rise of terrorist groups.

The US and a coalition of its allies further launched a military campaign against purported Daesh targets in Iraq in 2014, but their operations in many instances have led to civilian deaths.

Iraq’s parliamentary elections were held on May 12 and predominately Shia blocs won most seats at the legislature. However, political parties are still embroiled in negotiations over forming the largest bloc at the parliament.

Iraqi parties divided on US presence

Last month, US-led coalition spokesman Colonel Sean Ryan announced that the alliance would remain in Iraq despite the defeat of Daesh.

“We’ll keep troops there as long as we think they’re needed,” he said.

Hassan Salem, the head of parliament’s Sairoon (Marching Towards Reform) bloc which is led by Shia cleric Muqtada al-Sadr, urged Abadi not to bow to the US pressure to keep its forces in Iraq, saying lawmakers should determine Baghdad’s position on the issue.

Abadi, he said, “must respect the people’s will and refuse to succumb to US pressure to keep its forces [in Iraq].”

Additionally, Hezbollah Brigades, a faction of the Popular Mobilization Units (PMU) also known by its Arabic name Hashd al-Sha’abi, accused Washington of hiding its “ulterior hostile motives” by keeping its forces in Iraq.

US to send Daesh captives to Iraqi prisons, Gitmo

Separately on Friday, NBC News reported that the administration of US President Donald Trump is planning to send hundreds of Daesh captives to Iraqi prisons and the notorious US military prison, Guantanamo, in Cuba.

Citing US officials and European diplomats, the report said that the Iraq- and Cuba-bound terrorists “would be drawn from a group of about 600 currently held by the US-backed Syrian Democratic Forces (SDF)” in Syria’s militant-held areas.

“Many of the detainees are foreign fighters, and range from foot soldiers plucked off the battlefield to the highest value detainees who were tracked and captured with help from the military,” the report added.

This is while many Daesh elements were formerly held in US prisons.

In July, the US began the construction of its largest consulate building in the city of Erbil. The new US consulate, which will be built on a 200,000 square meter piece of land, will cost $600 million.

Back in 2009, the US inaugurated the largest and most expensive embassy in the world in Baghdad, suggesting that Washington was set for a long haul in the Arab country.