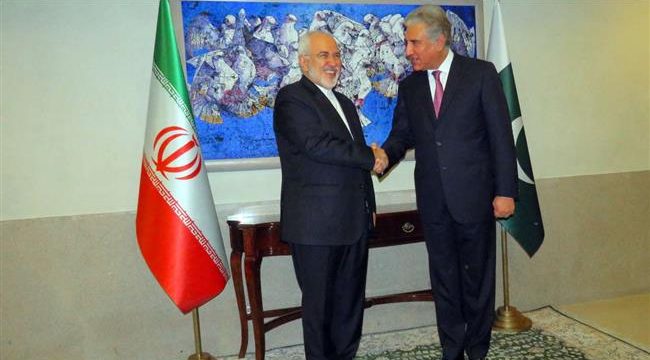 In a meeting with Pakistani Foreign Minister Makhdoom Shah Mahmood Qureshi in Islamabad on Friday, Zarif said Tehran sets no limitation to the expansion of ties with Islamabad.

He stressed the importance of improving mutual relations at regional and international levels, saying the two countries must further strengthen cooperation in the sectors of border security and banking as well as cooperation between Iranian and Pakistani ports of Chabahar and Gwadar.

According to a statement by Ministry of Foreign Affairs of the government of Pakistan, the newly-appointed Pakistani foreign minister, for his part, said Tehran and Islamabad have potential for strengthening the already strong bilateral relationship, adding that the two sides have stood by each other in difficult moments.

It added that both sides held detailed discussions about regional and global issues, including the situation in Afghanistan and US decision to unilaterally withdraw from the historic nuclear deal Iran signed with the P5+1 group of countries in 2015.

President of the United States Donald Trump withdrew Washington in May from the landmark Iran nuclear agreement, officially known as the Joint Comprehensive Plan of Action (JCPOA), and decided to re-impose unilateral sanctions against Tehran.

The statement also noted that the top Iranian and Pakistani diplomats agreed to host the next rounds of bilateral political consultations and the joint economic commission at early dates.

It said the two sides exchanged useful views on ways to strengthen cooperation in economic, cultural, trade and connectivity sectors and agreed to continue close consultations on border security through various forums.

Qureshi supported Iran’s principled stance on the JCPOA and expressed hope that the remaining parties to the agreement would uphold their commitments in letter and spirit.

He emphasized that the International Atomic Energy Agency (IAEA) has repeatedly verified that Iran had strictly adhered to the terms of the JCPOA and said Pakistan stands with Iran in this hour of need.

On Thursday, the IAEA once again reaffirmed Iran’s full compliance with its commitments under the Iran nuclear deal in the second such report after the US stopped fulfilling its side of the bargain and left the multilateral agreement in violation of international law.

“Timely and proactive cooperation by Iran in providing such access facilitates implementation of the Additional Protocol and enhances confidence,” it said.