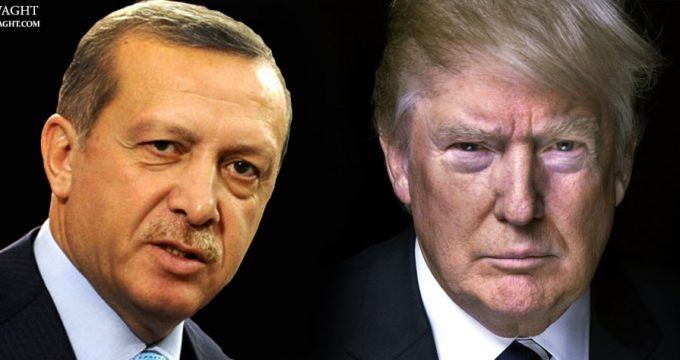 Alwaght – The new Turkish era, ushered in by the rise of Justice and Development Party (AKP)to power in 2002, is marked by the neo-Ottomanism of Recep Tayyip Erdogan and his fellow party members who seek to restore their country’s historical role as a regional hegemonic power and a weighty actor on the global stage. Despite the fact that the modern-day Turkish leaders know that the inheritor of the Ottoman Empire will never manage to return to the fallen empire’s borders and territories, they struggle to transform the modern state into a top regional actor on the strength of boosting it in a variety of areas, including diplomacy, economy, and military force. The Arab uprisings, erupted in 2011, provided the Turkish leaders with a unique opportunity to implement their neo-Ottoman plans. However, President Erdogan faced a great trouble as his policies ran counter to the international powers’ interests.

The independent policies of Ankara finally run into the powers’ interests, causing Turkish disputes with Russia and the US as key players in the West Asian region. The rift with Russia in Syria, caused by the Turkish shooting down of a Russian bomber en route to a military base after bombing the terrorist sites near Turkey’s border, winded down when the Turkish leader made an about-face in policy and apologized for the bomber incident. Diplomatic normalization between the two actors on the Syrian soil ensued. But the row with the West remains unfolding and shows no signs of softening.

The tensions with Russia drew a clear image of the Turkish leader, making him recognized as the man of abrupt foreign policy shifts. With this in mind, should we expect a change similar in Turkish policy to that of 2016 when the tensions escalated with Moscow?

There is a difference between Turkey’s rift with Russia and the rift with Washington. The rows are essentially different in terms of the degree and the type.

If we seek the roots of Erdogan’s turning head to Russia, we should look back at the failed military coup against Erdogan on July 15, 2016. The coup, according to the Turkish intelligence agency (MIT) documents, was arranged by the Americans. But Moscow and Tehran were the parties that in advance alerted Erdogan of the attempt. The two condemned the power grab effort since its initial hours. The event told Erdogan a truth: Americans are not Turkey’s allies and friends, moving Ankara to review its foreign policy and turn to the East. The botched military effort was just the start of the Erdogan antipathy to the US and Turkish-American tensions intensified when Washington rejected to extradite to Turkey Fethullah Gulen, the Pennsylvania-based influential Turkish preacher who was accused by Ankara of masterminding the attempted coup. Erdogan was infuriated even further by the US decision to continue arming and funding the Syrian Kurdish militias, seen by Turkey as branches of Kurdistan Workers’ Party (PKK), a Kurdish militant group that has been involved in an armed conflict with the Turkish state since 1984. As the time went by, the feud deepened, coming to a head with Trump unleashing a war of words against Turkey followed by sanctions and trade war.

Kremlin, however, was cautious not to escalate with Turkey during the aircraft crisis. It only took some reversible steps such as cutting diplomatic ties and imposing light sanctions on Ankara. During the period, the Russian officials reiterated that they did not want an escalation of tensions with Turkey. But the US, despite being decades-long Turkish ally, is mainly targeting Turkey’s politics, economy, and the whole social structure. The hostile measures have been so massive and destructive on the Turkish national security and economy that Turkey’s political community now regards the gaps with the US as fundamentally having their roots resting in the two sides’ identity differences.

The US Senate is considering banning the Muslim Brotherhood, an Islamist group across the Arab world, as a terrorist group to ramp up pressures on its supporter Ankara. The European Union, on the other hand, considers closed the Turkish bid to join the bloc. These developments bear witness to the West’s strategic incompatibility with Turkey’s return to its historical roots to which it is moving not via military coups and repression but democratic processes and public will.

If Turkey retreats in its row with the US, it will not have much in hand as a reward in return for its backing down to present to the home and regional public opinion. Trump said that even if Turkey releases the American pastor, who has been the source of the recent chill between the two, Washington will not give any privileges in return. On August 18, Erdogan sent a delegation to cool the situation down but the arrangement proved a failure. The Turkish leader knows that Washington’s trade fight has its roots not in the politics but in Trump’s mercantilist approach to the foreign trade as other partners, mainly China and the EU, also face the same unavoidable trouble. So, even Ankara’s political shift will not persuade Trump to bury the hatchet in the commercial fight.

The US-Turkey’s heated controversy comes while Russia-Turkey embarked in a smooth de-escalation after their ties went strained. Erdogan tacitly received the Russian green light to launch Operation Euphrates Shield in northern Syria against the Kurdish militias in 2016. Afterward, he secured a role in Astana and Sochi peace processes on Syria.

But the confrontation with the US has gone to an extent that no prospects of de-escalation and shift to Washington are in sight. Even further stress threatens their ties and an ultimate transition to the Eastern camp is not unlikely as their bad blood continues. Erdogan pointed to this possibility in an August 10 article on the New York Times.