Bloomberg |  Heesu Lee and Grant Smith: Brent crude is signaling that U.S. sanctions against Iran’s oil exports are starting to be felt in global markets.

Futures for settlement in November — when the American measures will go into effect — are trading higher than contracts for later months. That market structure, known as backwardation, is reflecting fears of a supply crunch. Meanwhile, Brent’s premium to New York prices has risen as U.S. crude is weighed down by pipeline bottlenecks and speculation that President Donald Trump will pursue efforts to lower fuel costs. 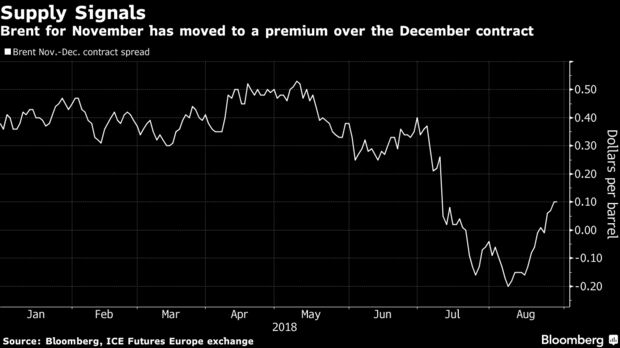 Most of Iran’s customers are already facing difficulties in buying the country’s crude even before sanctions are imposed on Nov. 4. Adding to the global supply situation is Venezuela’s economic struggle that’s sending its oil production lower. Investors are starting to see increasing uncertainty over whether other members of the Organization of Petroleum Exporting Countries will be able to pump more to fill any supply gap.

Brent for November settlement was at $76.48 a barrel on the London-based ICE Futures Europe exchange at 10:30 a.m. local time, 10 cents higher than the December contract. That’s the widest backwardation between the second and third-month contracts since early July. October Brent, which expires Aug. 31, rose 21 cents to $76.16 a barrel.

West Texas Intermediate crude for October delivery gained 25 cents to $68.78 a barrel on the New York Mercantile Exchange, after declining 34 cents on Tuesday. Total volume traded was about 52 percent below the 100-day average.

The U.S. crude benchmark’s discount to Brent was at $7.37 a barrel after closing at $7.42 on Tuesday, the widest in more than two months. 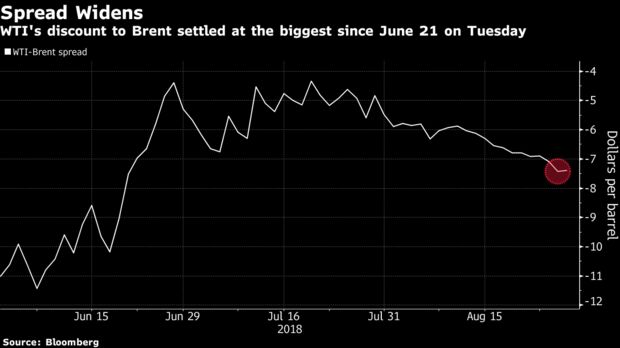 “There’s certainly a bottleneck — not enough pipelines to get all of the oil we’re producing in West Texas to get it to its two main outlet markets,” Stephen Schork, president of the Schork Group Inc., said in a Bloomberg radio interview. “I would expect that premium to continue to grow, given that you have the geopolitics, the Brent market is absolutely more vulnerable.”