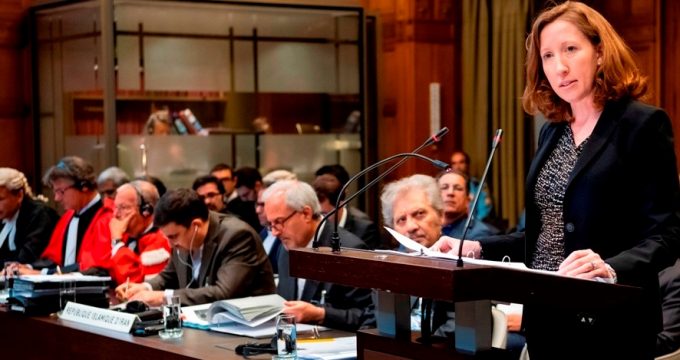 IRNA – The last session of International Court of Justice (ICJ) on Iran lawsuit against the US re-imposition of sanctions was held on Thursday.

The US President Donald Trump on May 8 declared that Washington unilaterally pulled out of the 2015 nuclear deal which was signed between Iran and the five permanent members of the UN Security Council.

Tehran says the measure violates the Treaty of Amity, Economic Relations and Consular Rights between the two countries that was signed in 1955.

The treaty, comprising of an introduction and 23 articles, was signed in Tehran and ratified by the Iranian government of the time. The government was permitted to exchange the related documents, following ratification by the National Consultative Assembly.

Iran’s Foreign Minister Mohammad-Javad Zarif said on July 16 that Iran has filed a lawsuit with the ICJ for the sanctions Washington imposed on Iran in May.

At the first round of hearings, each of the two sides of the lawsuit had three hours to present evidences. Iran and the US sessions were held on August 27 and 28 respectively.

On Tuesday session, the US raised accusations against Iran for pulling out of the nuclear deal.

On the first day of the second round of the hearing session on Wednesday, the Iranian side cited enormous shortcomings in the response of the US delegation. The Iranian delegation, referring to the 1955 Amity Accord, once again called for suspension of sanctions.

In the Wednesday session, the Iranian lawyers considered Washington marginalized in justifying its claims and underlined the destructive intension of the American statesmen in targeting Iranian people and economy.

The International Court of Justice is the main judicial body of the United Nations that settles the disputes between member states according to the international law and gives advisory information on queries referred to it from UN and specialized agencies.