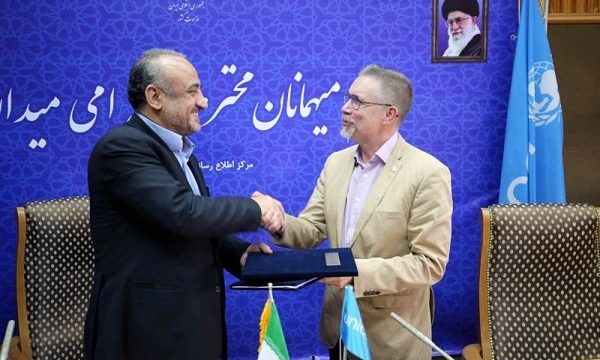 Iran, UNICEF sign document on mine clearance at Iran-Iraq border

MNA – Iranian interior minister has signed the second cooperation document with the UNICEF to demine the border areas between Iran and Iraq.

According to the Public Relations Department of Iran’s Interior Ministry, the representative of the United Nations International Children’s Emergency Fund (UNICEF) in Tehran Dr Will Parks signed a document with Iranian Interior Ministry representative Ramezan Shojaee Kiasari for cooperation on demining of the border areas between Iran and Iraq.

After signing the document, the Iranian Interior Ministry representative said “30 years after Iraqi-imposed war on Iran, we are still witnessing the deaths and injuries of children, women and men in areas on both sides of the border between the two countries,” adding that the UNICEF representative in Tehran Mr. Parks has promised “to cooperate on removing land mines from the country’s border areas.”

Meanwhile, the Iranian official said they will have to coordinate their efforts with the Iraqi side of the border.

The representative of UNICEF in Tehran, Dr Will Parks, for his part,  said that the new document has been prepared after consulting with experts in the field and expressed his hope that all the goals of the document can be fully realized.